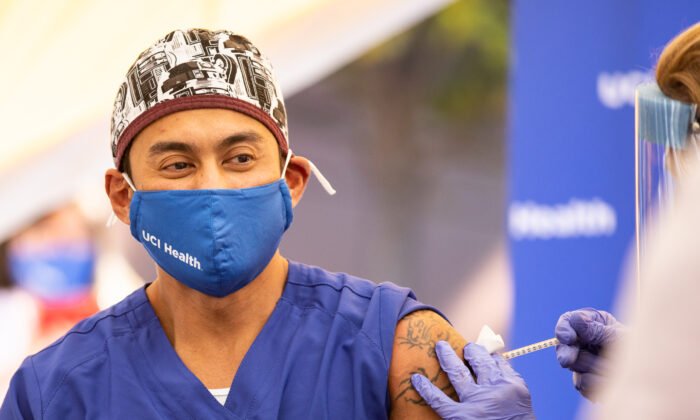 Oklahoma was granted a temporary restraining order that blocks Ascension Healthcare from terminating employees who were denied religious exemptions from the firm’s COVID-19 vaccine mandate.

Oklahoma Attorney General John O’Connor had filed for a restraining order against the company’s requirement. On the night of Nov. 12, a Tulsa district judge granted the request, according to the O’Connor’s office.

“This evening, the Tulsa District Court granted the State’s Application for Temporary Restraining Order in our case to keep Ascension Healthcare from carrying out its plan to fire employees who were unfairly denied religious exemptions from their nationwide COVID-19 vaccination mandate,” the Republican attorney general said in a statement. “This is a win for religious freedom and our office will continue to fight against unlawful religious discrimination.”

Some Ascension employees who worked during the pandemic, he said, sought a religious exemption to the vaccine but were unfairly denied.

Ascension Healthcare operates in 19 U.S. states and the District of Columbia, including across Oklahoma. The company has not responded to a request for comment. The company is based in St. Louis, Missouri.

The firm, however, issued a statement to media outlets over the weekend that it mandated the vaccine because “we want patients to be assured and comforted with the knowledge that our doctors and nurses, other clinicians and associates, working in one of our hospitals or other sites of care, will either be vaccinated against both COVID-19 and influenza.”

Ascension Healthcare in July announced it would require its employees to receive the vaccine by Nov. 12 or face termination.

“I applied for a religious exemption, I was denied,” nurse Lisa Johnson told KTUL. “I appealed the religious exemption denial and was denied a second time. We were pretty much told that if we were not compliant by the end of our work shift today we would be suspended.”

Nurse Tricia Smith, whose religious exemption was also denied, said that it’s “hard to justify going against my convictions for a job.”

“It would make me so happy for Ascension to have to reinstate us all and say we’re sorry because we didn’t do the right thing,” she added.