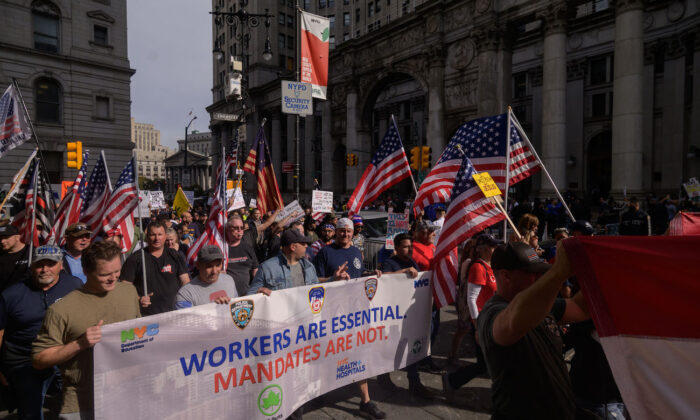 Municipal workers hold placards and shout slogans as they march across Brooklyn bridge during a protest against the COVID-19 vaccine mandate, in New York, on Oct. 25, 2021. (Ed Jones/AFP via Getty Images)
AMERICA

Congressional Republicans are pushing proposals to exempt millions of American workers who object to President Joe Biden’s mandatory CCP virus vaccination orders and similar decrees by employers, which are prompting widespread protests and costing many workers their jobs.

Biden has ordered all federal military and civilian employees to be vaccinated, as well as those employed by federal contractors and entities receiving federal support, in connection with the government’s many virus recovery programs.

A new federal regulation is also being prepared that will require all private companies with 100 or more employees to make vaccination a condition of employment. The regulation is to be enforced by the Department of Labor’s Occupational Safety and Health Administration (OSHA).

Biden’s mandate and similar mandates by other officials are sparking protests around the country. Multiple cities, including Chicago, Denver, Seattle, and New York, have also ordered employees to get vaccinated. In New York earlier this week, thousands of police, firefighters, and other city employees took to the streets to protest.

Civil liberties groups such as Liberty Counsel report being contacted by thousands of federal military and civilian workers, as well as corporate employees, seeking legal assistance in their efforts to be exempted from the mandates on the basis of medical or religious grounds.

The commercial airline industry has also been hit hard by employee protests, including a recent sick-out that delayed thousands of Southwest Airlines flights. Liberty Counsel is also advising U.S. Freedom Flyers, a group of 35,000 transportation industry employees challenging the mandates.

Sen. Marsha Blackburn (R-Tenn.) on Oct. 27 introduced her “Keeping Our COVID-19 Heroes Employed Act” to protect essential workers from being fired as a result of their objection to being vaccinated.

“Our essential workers are true heroes,” Blackburn said in a statement announcing the proposal. “For over 18 months, essential workers showed up to serve and protect their communities. Businesses across the country are desperate for workers, and we are in the midst of a supply chain crisis.

“There are more than 10.4 million open jobs across the country, and now President Biden wants to fire even more workers. Getting vaccinated is a choice that should be made between a patient and their doctor. No one should be forced by Joe Biden to be fired or get jabbed.”

The Tennessee Republican’s bill defines an essential worker as any that were defined as required by a state, tribe, or U.S. territory as “essential during the response to the COVID–19 pandemic.”

Employees who would be covered by the exemption to the mandate include those working for the federal government, state and local governments, private employers receiving federal contracts, and those receiving federal funds under multiple laws approved by Congress and the president in 2020 and 2021 in response to the pandemic.

“Well before President Biden’s ill-advised and divisive vaccine mandate, I had been hearing from doctors, nurses, first responders, and others facing the life-altering decision of having to choose between losing their job or being coerced into taking a vaccine,” Johnson said in the statement.

“We are already suffering severe worker shortages throughout our economy, especially in health care. Vaccine mandates will increase these shortages and degrade our health care system.”

On the same day Blackburn introduced her proposal, Rep. Dan Newhouse (R-Wash.) submitted a similar bill in the House, the “Options Over Terminations Act,” which creates a vaccine exemption “for any federal employee or contractor who provides proof of COVID–19 antibodies.”

Newhouse said in a statement announcing his bill that he believes “federal employees who have opted not to receive the vaccine because they have natural immunity developed after recovering from the virus do not deserve to be fired.”

“President Biden’s overreaching mandate has severe ramifications for communities across the country, especially for communities like Central Washington who make up a large part of the federal workforce. Instead of forcing our federal workforce to choose between employment and vaccination, my bill provides them with an option—a permissible, science-based exception from President Biden’s recent Executive Order,” he said.

Asked by The Epoch Times if he thinks Biden should revise his order to allow for such exemptions, Newhouse said, “It would be great if Congress didn’t need to constantly legislate on President Biden’s overreaching actions, but unfortunately, that is not the state we find ourselves in today.”

He said Biden’s order is the model for orders similar to that of Washington Gov. Jay Inslee that resulted in the firing or resignation of more than 1,900 state employees.

Medical authorities disagree on whether individuals who have recovered from the virus benefit from also being vaccinated.

Centers for Disease Control and Prevention (CDC) Director Rochelle Walensky said in August that “if you have had COVID-19 before, please still get vaccinated.” But a study in Israel made public in August concluded that natural immunity isn’t significantly strengthened by also being vaccinated.

Rep. Diana Harshbarger (R-Tenn.), a licensed pharmacist since 1987, told NTD during a recent interview that “there’s ample scientific studies that show that natural immunity is absolutely one of the best things you could have—and some studies even show that it’s more effective” than being vaccinated.

Sen. Mike Lee (R-Utah) and Rep. Madison Cawthorn (R-N.C.) introduced the “Let Me Travel America Act” on Oct. 20 that would bar the Biden administration from requiring vaccine passports certifying the bearer has been vaccinated as a condition for interstate travel.