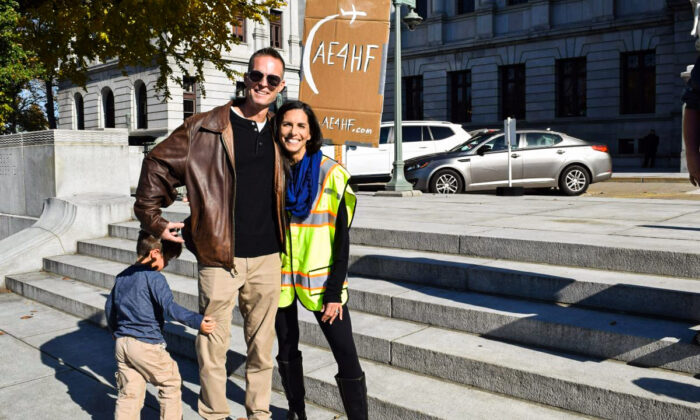 Diversity, equity, inclusion: this has been the mantra of United Airlines. United pilots Stephanie and Kyle Atteberry thought the company meant it.

“United has been great to us,” Kyle told The Epoch Times. He recalls receiving blankets from the company as gifts when each of their six children was born. “Our expectations were, United would honor our faith.”

Kyle and his wife, Stephanie, live in Lancaster County, Pennsylvania. Their jobs, flying Boeing 767 and 757 aircraft, routinely took them around the world until Oct. 1, the last day United allowed them to fly.

The couple isn’t getting the COVID-19 vaccine. They’re among the 2,000 United employees who requested reasonable accommodations through medical or religious exemptions from the vaccine mandate. As an accommodation, United placed them on unpaid leave indefinitely. The 2,000 employees are part of Airline Employees 4 Health Freedom, a group legally challenging being placed on unpaid leave.

“They’ve already shown us what a reasonable accommodation looks like because we’ve been doing it for a year and a half,” Kyle said. “Now they say I’m unsafe to come to work?”

In May, the company sent employees a letter with an incentive offer: pay for 13 hours of flight time, amounting to $2,600, for those who got vaccinated. And there was a penalty: Those who didn’t get the shot wouldn’t be able to fly to as many international destinations. That means less work available for the unvaccinated. From there, the list of countries unvaccinated pilots couldn’t fly to grew, until Germany was the only international place where the Atteberrys could fly.

Now they’re both on unpaid leave.

“I feel betrayed by the airline that says it is all about love and respect, and yet here we are being sidelined. And seeing other airlines accommodating their employees—it’s frustrating,” Kyle said.

The stress of working through the situation has loomed over them for months.

“It’s like a decay in my bones—like a shakiness in my soul,” Stephanie told The Epoch Times. “But that has gone away as the Lord has provided an amazing sense of peace for me.”

Stephanie’s mother is a United flight attendant with 44 years of experience. She’s also on leave without pay. Growing up, Stephanie’s family traveled frequently, using the benefit of her mother’s free travel.

From 14 to 16, Stephanie begged for flight lessons and finally, at 16, she got her first flight lesson. She recalls driving down the Lancaster runway with tears of joy running down her face. By the time she graduated high school, she had a private pilot license and went on to Baylor University to attend flight school.

Kyle is a second-generation airline pilot. His father flew an F-4 in the Marines and then flew for Continental Airlines (which merged with United in 2012) until retiring in 2005.

Kyle attended Baylor on a football scholarship, which afforded him the opportunity to take its aviation program. He graduated and was a flight instructor at Baylor when he met Stephanie in her sophomore year.

They married, and their careers grew from flight instructors to commercial pilots, often working odd hours. Sometimes they saw each other at home just two nights a month. Other times they would meet at a mutual destination away from home.

When she was 24 and he was 29, they were hired at Continental (now United) and now, thanks to their seniority, they have flexible schedules. One of them is always home with the children, aged 23 months to 13 years.

“The flexibility in scheduling is a huge blessing,” Stephanie said.

“As you gain seniority, you’ll be working the holidays and weekends,” Kyle said. “That’s one of the main reasons we wouldn’t want to go fly somewhere else. We would lose all that flexibility.”

“We cannot do that again,” Stephanie added. “We both cannot go get an airline job. My career is essentially over.” And that breaks her heart, she said, because the thrill of take-off still inspires her like it did when she was 16.

“My first flight back after 20 months off from my maternity leave—I really wasn’t looking forward to coming back because of how much more difficult traveling had become because of COVID and all the measures. But as we took the runway in EWR [Newark Liberty International Airport] and started down the runway, I got that same joyful feeling that made my eyes well up with tears,” Stephanie said. “And as we climbed out, I thanked God that flying still brought me so much joy, even in the midst of all the difficulties of the operation. I just want to be allowed to fly as I honor my God.”

Faith Is Their Flight Plan

“We don’t expect everybody to understand fully where we are coming from,” Kyle said. “As your faith grows, your understanding changes.”

Some of their older children have vaccines, but their younger ones don’t.

“We feel strongly about being good stewards of what God has given you, including your body,” Stephanie said. She chose natural childbirth to avoid medicine. They make intentional decisions about how they exercise, and they eat thoughtfully.

When Stephanie learned that some vaccines are made from cells obtained from aborted babies, vaccines were no longer an option.

“I am so strongly pro-life, I can’t have anything to do with abortion,” Stephanie said. “By taking the vaccine, we would be participating in the abortion industry.”

“Part of being a pilot is being healthy and fit,” Kyle said. “Every flight we go on, we must certify we are fit for flight. That places the responsibility of fitness for flight on us. Nobody can tell us how the vaccine is going to affect us down the road, and there is evidence of negative short-term effects. Not only does it violate my sincerely held religious beliefs, but it violates my conscience. I don’t know how it will affect me.”

Their children attend a Christian school that rotates between classroom and homeschool hours. One child has special needs, so they pay extra for a tutor.

With no income, they may have to pull the kids out of school and drop piano lessons, soccer, and cross country.

“Our older children are well aware of what is going on. It’s the hardest thing to see my children suffer emotionally,” Kyle said. “We’ve got our thermostat turned to 55 and haven’t turned the heat on yet.”

They’re living off savings for now and trying to figure out how to replace two pilot incomes.

If he could talk to Biden, Kyle would ask, “With all the science and data at your disposal, how can you honestly tell the American people that these COVID injections are the only scientific and ethical answer moving forward?” And he would ask Biden to reaffirm the law that protects Americans seeking religious and medical accommodation so that their jobs and livelihoods wouldn’t be penalized with unpaid leave.

“If we give up our religious freedom—our bodily autonomy, we are slaves,” Stephanie said. “If we don’t say no, it’s never going to stop.”

A United spokesperson told The Epoch Times in an email: “We know that the best way to keep everyone as safe as we can is for everyone to get vaccinated, as nearly all United employees have chosen to do. We are working to identify non-customer facing roles where accommodated employees can apply and continue working until it is safe for them to their return to their current positions.”