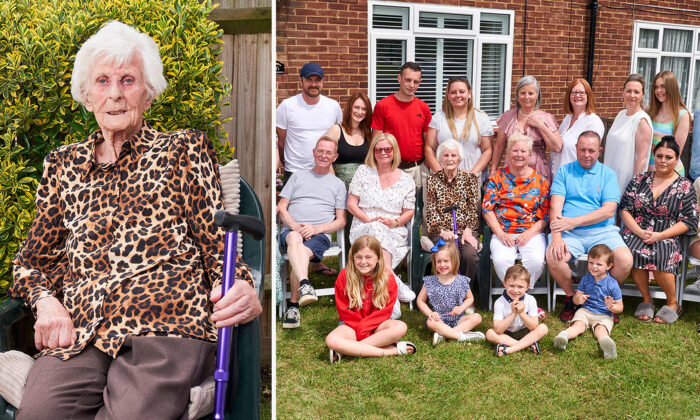 With 98 years between Rose Sharp and her great-great-great-granddaughter Amelia, the family from Kent, England, are thrilled to be able to mark the milestone birthday all together.

The 100-year-old mother of eight is the head of a huge family and has a whopping 92 grandchildren, including great-great-grandchildren.

Great-granddaughter Joanne Pendrigh, 43, says Rose is a really strong woman and, having been widowed for more than 40 years, is fiercely independent.

“She is right at the top of our family tree and she is a really strong role model for us all.  A true matriarch—who loves to play bingo,” Joanne said, describing her grandmother. “She is as sharp as they come, she has seen it all, done it all, and takes it all in her stride.”

Joanne, who part-owns a hair salon, thinks it’s wonderful that Rose has lived to see five generations of females born after her and says the centenarian is very proud of her long line of family members.

“We are a really big family, someone is always having a baby,” Joanne said. “Rose loves kids, they are all spoilt rotten.”

Rose married her late husband, William, when she was 19, after friends introduced them. The couple were married for 35 years until William died at the age of 56.

During the course of her life, Rose worked in a munitions factory during World War II, and the couple had eight children, six boys and two girls, including daughter Carol Jasper, now 77.

Sarah, 60, a housewife, has seven children, including Joanne.

“It does get confusing with so many of us,” Joanne said, laughingly. “I have tried to find other families with six living generations but I think we are quite rare.”

Rose was the fourth child born of seven kids and had two sisters and four brothers, but she has outlived them all.

To celebrate Rose’s birthday, the family had a garden party and were excited to reunite after the lockdown.

“Rose loved receiving her telegram from the Queen and the family bought her flowers and gifts,” Joanne said. “But her most precious gift is to be able to finally spend quality time together again as a family and for Rose to spend time with her grandchildren again. She said they have all grown so quickly over the last year.”

According to Joanne, during the lockdown, the family tried to stay in touch as much as they possibly could. However, with Rose’s age, they couldn’t visit, so it was thus special for them to meet during this precious occasion.

“Rose didn’t manage FaceTime during lockdown but she does have a mobile which I think is very impressive for someone who is 100,” Joanne said. “We are a close-knit family and we try to get together as often as possible and we want to celebrate her life.”

“It’s amazing that from one woman so many families and lives have been created and we all have so much to thank her for,” Joanne added.

Sharing her secret to a long and happy life, Rose said: “Have lots of children and take care of them. I wouldn’t have it any other way.”