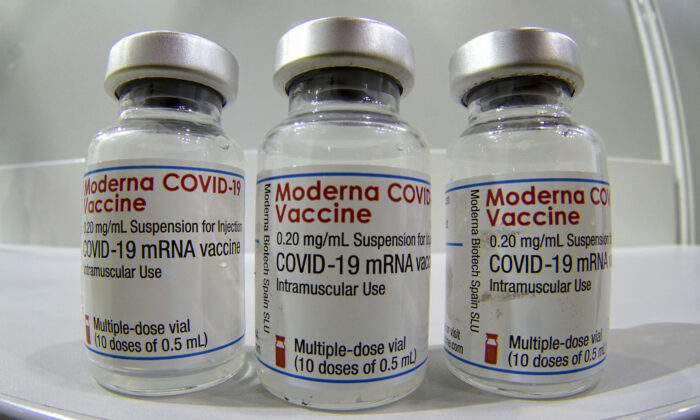 Three vials of the Moderna COVID-19 Vaccine are pictured at a new COVID-19 vaccination center at the "Velodrom" (velodrome-stadium) in Berlin, Germany on Feb. 17, 2021. (Michael Sohn/Pool/Getty Images)
Vaccines & Safety

German health authorities followed other European nations on Wednesday in advising against the use of Moderna’s Spikevax COVID-19 vaccine for people under the age of 30 after evidence emerged the shot has a slightly higher risk of cardiac inflammation.

A German advisory committee, known as STIKO, cited findings similar to a study published on Nov. 8 by France’s Epi-Phare, showing that vaccines using mRNA technology were associated with an increased risk of hospitalization for myocarditis (inflammation of the heart muscle), and pericarditis (inflammation of the tissue surrounding the heart), in younger patients—with a slightly higher prevalence in those who received Moderna.

STIKO made no mention of the COVID-19 vaccines from AstraZeneca and Johnson & Johnson.

The German health officials adjusted their CCP (Chinese Communist Party) virus vaccination guidance just one day after French health authorities also recommended the Pfizer jab over Moderna’s due to similar heart disease concerns. They stressed the risk of developing the heart condition is “very rare,” according to a translated statement posted on the French National Authority for Health (HAS).

The recommendations in Germany are based on new safety data from the Paul Ehrlich Institute (PEI), the country’s authority in charge of vaccines, and new international data.

In the 12–17 age group, the rate was 11.41 for males with the Moderna shot compared with 4.81 for BioNTech/Pfizer. There was no data provided for females in the lower age group.

On Tuesday, Moderna sought conditional marketing authorization with the European Medicines Agency (EMA) for use of a 50 micrograms dose vaccine in children aged 6 to 11.

EMA said on Wednesday they expect to respond with a decision in about two months. Moderna has also sought U.S. authorization of its vaccine for use in teens in June and is awaiting a decision by the U.S. Food and Drug Administration.

“The current timeline for evaluation foresees an opinion in approximately 2 months, unless supplementary information or analysis is needed,” EMA said in a statement.