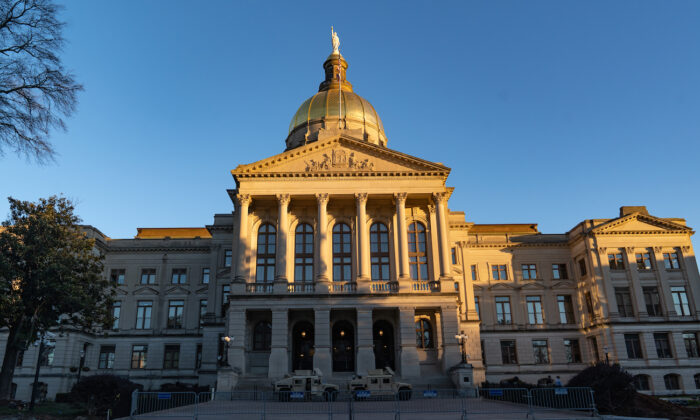 Georgia Gov. Brian Kemp on Thursday signed into law a number of election reforms that include photo ID requirements for absentee voting, the need for drop box security, and mandatory early voting dates, among other changes to how the state’s elections are run.

“I was proud to sign S.B. 202 to ensure elections in Georgia are secure, fair, and accessible,” Republican Kemp announced on Twitter. “I appreciate the hard work of members of the General Assembly to make it easy to vote and hard to cheat.”

Prior to its signing, the 95-page bill (pdf) passed the state House by a 100-75 vote and the state Senate by a 34-20 vote, with Republicans in support. Republicans currently hold a majority in both chambers. No Democrats voted for the reform measures.

“With Senate Bill 202, Georgia will take another step toward ensuring that our elections are secure, accessible, and fair,” Kemp said in livestreamed remarks shortly after signing the bill.

“After November, I knew like so many of you that significant reforms to our state elections were needed,” Kemp added. “There’s no doubt there were many alarming issues with how the election was handled and those problems understandably led to the crisis of confidence at the ballot box here in Georgia.”

More than 1.3 million Georgian voters had opted to vote absentee by mail in the 2020 presidential election and the state underwent multiple manual and machine recounts, and an absentee ballot signature match audit but only in one county.

“When voting in person in Georgia, you must have a photo ID. It only makes sense for the absentee ballot to have the same standard as well,” Kemp said, adding that the new state-issued ID requirement will “dramatically streamline the verification process” on absentee ballots.

Under the new law, secure drop boxes are to be placed inside early voting locations. There should also be constant surveillance of the boxes by an election official or their designee, a law enforcement official, or a licensed security guard.

For runoffs, the law shortens the election cycle from nine weeks to four weeks and requires a minimum of one week of early voting before election day.

Kemp said that the law also “speeds up processing to ensure quicker election results, requires security papers to allow for the authentication of ballots, and allows the bipartisan State Election Board to have more oversight over counties [that] fail to follow state election law.”

In calling for more oversight over counties, the law’s introduction states that Georgia counties with dysfunctional election systems can lead to problems for voters such as with waiting lines, processing of absentee ballots and other administrative challenges, and state officials are limited in what they can do to address such problems—as such, having a mechanism to address such problems “will promote voter confidence and meet the goal of uniformity.”

The law also limits absentee ballot requests to no later than 11 days before election day. State Rep. Jan Jones, a Republican, said the provision is meant to “increase the likelihood of a voter’s vote being cast successfully,” after concerns were raised in 2020 about mail ballots not being received by counties in time to be counted.

The new law stipulates that votes cast in a precinct different from the one in which the voter is registered will not be counted. The exception is when the vote is cast after 5 p.m. on the day of an election, and the voter makes a sworn statement, providing a reason as to why they were unable to make it to their correct polling place prior to polls closing.

Among other stipulations, the law prohibits people to solicit votes, distribute or show any campaign material, or provide money or gifts, including food and drink, within 25 feet of voters standing in line at any polling place, and within 150 feet of any polling place.

A telephone hotline will be set up to receive complaints and reports regarding alleged voter intimidation and election fraud, which would be reviewed by the Attorney General within three days.

The law does not ban no-excuse absentee voting, something that has been allowed in Georgia since 2005.

The American Civil Liberties Union and Georgia’s National Association for the Advancement of Colored People said on Thursday that they will challenge the legislation in court.