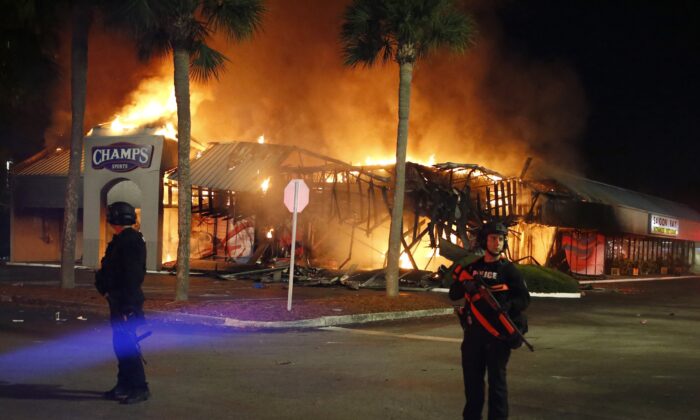 Police SWAT officers guard firefighters as they respond to the Champs Sports store, in Tampa, Fla., on May 31, 2020. (Luis Santana/Tampa Bay Times via AP)
Republicans

Florida’s Republican-controlled legislature approved an “anti-riot” Combating Public Disorder bill on Thursday that includes stiffer penalties against violent protesters, creates disincentives for local governments to adopt “defund the police” measures, and gives citizens more protections such as by making drivers not civilly liable for injury or death if “fleeing for safety from a mob.”

The bill, called HB1: Combating Public Disorder, imposes felony-level penalties for engaging in violent or disorderly assemblies, obstructing traffic during unpermitted protests, and for destroying or toppling monuments, according to a fact sheet from Florida Gov. Ron DeSantis’ office (pdf). It also increases criminal penalties for assaulting police officers during riots, increases liability for anyone who organizes or funds a violent or disorderly assembly, and makes it easier for victims of riots to sue local governments for damages. The bill also says that local governments cannot cut their police budget without approval from the state.

It now heads to the desk of DeSantis, who is expected to sign it into law.

“This legislation strikes the appropriate balance of safeguarding every Floridian’s constitutional right to peacefully assemble, while ensuring that those who hide behind peaceful protest to cause violence in our communities will be punished,” DeSantis said in a statement.

The measure has drawn intense passions, with proponents seeing it as a welcome step toward asserting law and order and supporting law enforcement in responding to protest-related violence. Opponents see it as a measure meant to muzzle dissent that would have a chilling effect on legitimate protests.

“It is clear that Gov. DeSantis and certain legislative members are aiming to shut down political speech they disagree with in a direct attack on the First Amendment and at the cost of Black and Brown people. This bill is a disgrace to our state,” Kubic added.

“Rights have limits, and violence is where the line is drawn,” said Republican state Sen. Danny Burgess, who carried the bill in the state Senate. “This bill is about preventing violence.”