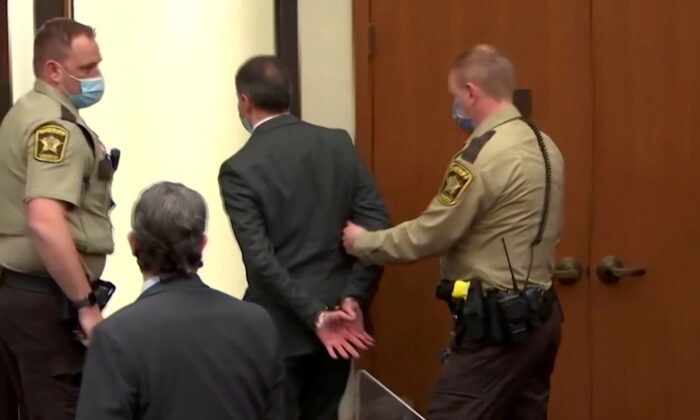 The jury that found former Minneapolis police officer Derek Chauvin guilty in the death of George Floyd was at peace with their verdict, according to the first juror who deliberated at the trial to reveal his identity and speak publicly about the experience.

“After we deliberated and we had to do some explaining to a few people, breaking it down a little bit further, everybody was on the same page,” Brandon Mitchell, a 31-year-old high school basketball coach, said on the “Get Up! Mornings With Erica Campbell” podcast.

Last week, the jury found Chauvin guilty of second- and third-degree murder and second-degree manslaughter in Floyd’s death outside a convenience store in Minneapolis last Memorial Day. After closing arguments concluded on April 19, jurors reached their verdict the following day, after about eight hours of deliberations.

According to Mitchell, who is black, most of the jury was in agreement nearly immediately on convicting Chauvin. But at least one juror wanted to slow down and consider things carefully.

“It wasn’t like we just walked right in the room and everybody was like ‘Let’s get it done.’ There’s always one person that’s like ‘What about this, what about that.’ So we sat in the room and argued for a few hours pretty much with just one person. Just trying to get them, to see where they’re coming from, and trying to get them on board with where everybody else was,” he said.

“I think the one juror that was kind of—I wouldn’t say slowing us down—but was being delicate with the process more so, was just kind of hung up on a few words within the instructions and just wanted to make sure that they got it right,” he added on ABC’s “Good Morning America.”

“We just kind of went around the room, we broke down, we literally broke down the sentences and broke down the words and what the meanings were, and just described in several different ways from different perspectives until we came to a common conclusion.”

Mitchell, a Minneapolis resident who has a podcast on dating and relationships, said he thought deliberations should have been over in just 20 minutes.

Before the verdict was read, some experts believed the jury could return a split decision, convicting Chauvin on one or two counts and acquitting him on one or two others.

Chauvin, whose lawyer hasn’t responded to requests for comment, now faces up to 40 years in prison. He’s being held in isolation at the state’s only maximum-security jail, the Oak Park Heights prison in Stillwater, until sentencing in June.

Hennepin County Judge Peter Cahill, who presided over the trial, recently ordered restrictions on disclosure of juror information to continue until further notice. But he left open the option for jurors to identify themselves.

Lisa Christensen, one of two alternates who was dismissed before deliberations, previously spoke to the media about the case.

In the new interviews, Mitchell said that he became exhausted from having to watch video footage of Chauvin kneeling on Floyd’s neck and back and began turning away so as to not watch when the footage was shown during the trial.

He also recounted being struck by the testimony of different people, noting the moment that Floyd’s brother Philonise Floyd took the stand and told jurors about their childhood together.

Asked by Campbell if he had a message to people about accepting jury duty, he added: “It’s just important. If we want to see some change and want to see some things going differently, we got to get out there and get in these avenues and these rooms to try to spark some change.”