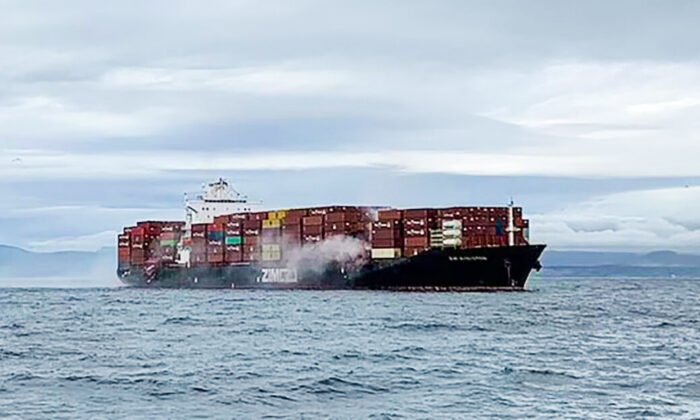 Smoke rises from the container ship Zim Kingston, burning from a fire on board, off the coast of Victoria, British Columbia on Saturday. (Canadian Coast Guard / Reuters)
Americas

A fire broke out in containers on a cargo ship carrying chemicals off British Columbia on Oct. 23, according to officials with the Canadian Coast Guard, which said it’s working with the U.S. Coast Guard to deal with the incident.

Sixteen crew members have been evacuated from the Zim Kingston, while five remained onboard to battle the fire, the Canadian Coast Guard said in a statement on Oct. 23. At one point, Coast Guard officials said that as many as 10 containers on the ship—carrying mining chemicals—were on fire.

“The ship is on fire and expelling toxic gas. Two fallen containers are floating in the vicinity of the vessel,” the Canadian Coast Guard said. The ship is currently located in the Strait of Juan de Fuca, which separates Canada’s Vancouver Island and Washington state’s Olympic Peninsula.

Meanwhile, an “emergency zone” was set up for one nautical mile around the ship amid firefighting efforts, the Coast Guard told Canada’s GlobalNews.

#BreakingNews Coast Guard crews are monitoring several adrift shipping containers 43 miles west of the Straits of Juan de Fuca entrance. An inbound vessel lost approx. 40 containers when the ship listed to its side due to rough seas. Check back for updates. pic.twitter.com/GInKf8M0sB

“Any fire onboard a ship is a serious event and will garner a lot of attention and a lot of resources very quickly,” said Chamber of Shipping President Robert Lewis-Manning.

“Their first action is to figure out what is happening on the vessel. It’s a big vessel. It’s 260 meters long or thereabouts, and it’s got thousands of containers on board, so [first is] trying to isolate where the problem is,” he said, adding that it’s usually the crew’s responsibility to deal with container ship fires.

“No injuries were reported,” Danaos Shipping Co., the company that manages the ship, said in a statement to Reuters on Oct. 24, before adding that the fire “appears to have been contained.”

But the ship fire could pose more significant problems in the near future.

“This is extremely concerning. The ship and containers are very close to Victoria, BC, and a big storm is forecast to hit tonight. We … are worried this may be yet another environmental disaster,” said David Boudinot, president of Surfrider Foundation Canada, an environmental organization.