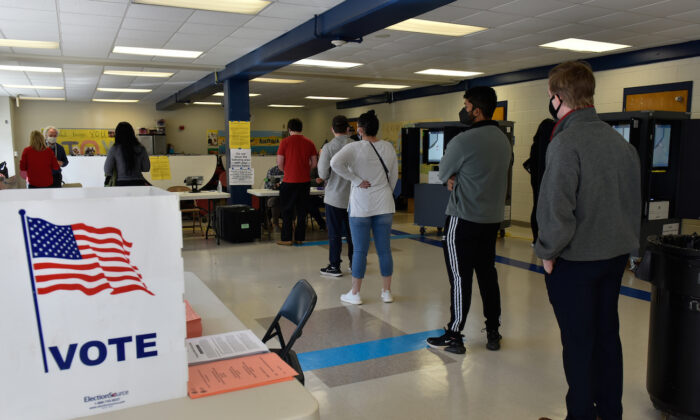 Voters go to the polls at Sara Smith Elementary polling station, in the Buckhead district, in Atlanta during the Georgia Senate runoff elections, on Jan. 5, 2021. (Virginie Kippelen/AFP via Getty Images)
Election Integrity

A federal judge in Georgia declined to block portions of the recently passed Georgia election law after an organization filed a legal challenge that sought to invalidate parts of the mandate.

The Coalition for Good Governance, a left-leaning group that describes itself as an election security group, opposed the Election Integrity Act of 2021’s provision that voters request absentee ballots at least 11 days ahead of Election Day. The suit also asked the court to intervene to rescind restrictions on election observers.

But U.S. District Judge J.P. Boulee, in ruling against the petition, said he wouldn’t “change the law in the ninth inning” in reference to ongoing runoff elections for seats in the Georgia state House.

“Election administrators have prepared to implement the challenged rules, have implemented them at least to some extent and now would have to grapple with a different set of rules in the middle of the election,” Boulee wrote in an 11-page order. “The risk of disrupting the administration of an ongoing election … outweigh the alleged harm to plaintiffs at this time.”

This case is separate from litigation filed last month by the Department of Justice (DOJ) that opposes key provisions of the law, including voter identification requirements, drop-box limits, provisional ballot rejections, and others. The DOJ, along with top state and federal Democrats, have argued the law is an effort to suppress voter turnout rates among minority groups, while Republicans have said it would safeguard future elections in the Peach State.

Marilyn Marks, executive director of the Coalition for Good Governance, said her group will file more legal challenges to block enforcement of the law’s provisions before special and municipal elections in Georgia this fall.

“We’re concerned about the voter confusion that will no doubt occur with these little-known rapid changes to the rules, including the required information on ballot applications and the short deadline for applications to be received in this last week before the election,” Marks said in a statement, reported the Atlanta Journal-Constitution.

In response to the judge’s decision on Wednesday, Secretary of State Brad Raffensperger, who has vowed to fight any lawsuits against the law, stated the Coalition for Good Governance’s case was just “another in the line of frivolous lawsuits against Georgia’s election law based on misinformation and lies.”

“We will continue to meet them and beat them in court,” he said.

Gov. Brian Kemp, a Republican, has frequently defended law after he signed it in March. The governor has described criticism against the law as unfounded and said Democrats have mischaracterized certain provisions.