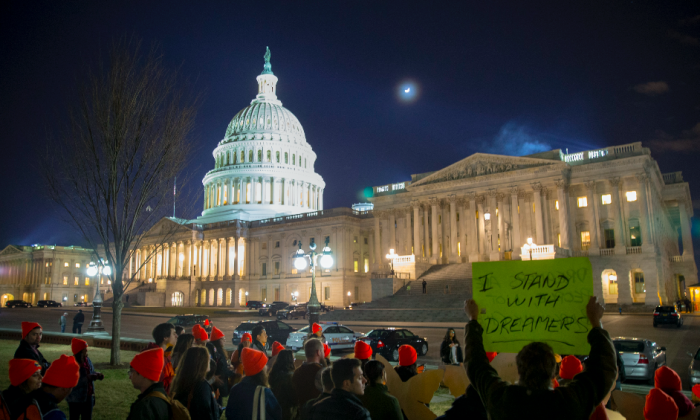 A Texas federal judge on Friday ruled that the Deferred Action for Childhood Arrivals (DACA), an Obama-era policy that shields certain illegal immigrants from being deported, is unlawful and blocked new applications from being filed.

U.S. District Judge Andrew Hanen argued that the policy goes against the Constitution because Congress never provided the executive branch authorization to grant deportation reprieves to illegal immigrants in the United States. DACA, which was established in 2012 by President Barack Obama’s administration, has granted an estimated 800,000 individuals protection.

“Congress has not granted the Executive Branch free rein to grant lawful presence outside the ambit of the statutory scheme,” wrote Hanen (pdf), who was appointed by former President George W. Bush. “It is not equitable for a government program that has engendered such significant reliance to terminate suddenly,” he also wrote in ordering that the status of people currently in DACA doesn’t change and they can continue to seek renewal of their status.

“This consideration, along with the Government’s assertion that it is ready and willing to try to remedy the legal defects of the DACA program, indicates that equity will not be served by a complete and immediate cessation of DACA,” the judge wrote.

Illegal aliens in the United States who were 30 years or younger received protection from the program. In order to receive DACA protection, they must have arrived in the country by 2007 before they turned 16, and they also had to be a student or a graduate with no serious criminal record, among other requirements.

The Obama administration and Democrats often referred to the young illegal immigrants as “Dreamers” after the Dream Act, which would have granted them an easier path to becoming American citizens, failed to pass in Congress about a decade ago.

Later, the Trump administration attempted to rescind DACA in 2017, which drew significant criticism from Democrats and triggered a mainstream media-driven pressure campaign that painted the administration as heartless. President Donald Trump wrote at the time that DACA “gives the President of the United States far more power than EVER anticipated.” Before that, he described it as an illegal amnesty program that only serves to boost Democrats’ chances of winning elections.

The Supreme Court ultimately blocked Trump’s attempt to do away with the program in 2020, which led to the Trump administration’s attempts to block new applications under DACA. Another judge rejected the administration’s bid and ordered DACA’s restoration.

Hanen ruled on a lawsuit that was brought by Texas, which was joined by Alabama, Arkansas, Louisiana, Nebraska, South Carolina, and West Virginia. The states argued that the program is tantamount to federal overreach.

The ruling is sure to put more pressure on Congress and the Biden administration to try and pass a permanent law. This comes as nearly 190,000 illegal immigrants were apprehended along the U.S.-Mexico border in June. If such a bill is proposed, amid the significant surge of illegal immigrants, Republicans likely won’t support it.