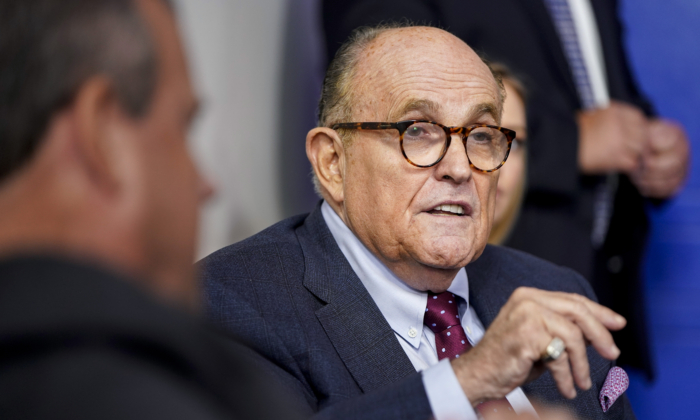 A lawyer for Rudy Giuliani said federal investigators executed a search warrant at the home of the former New York City mayor and attorney to former President Donald Trump and seized electronic devices.

Giuliani’s attorney Robert Costello told Fox News that seven FBI agents arrived at his Manhattan apartment at 6 a.m. on April 28 and remained there for about two hours. They seized laptops, cell phones, and other electronic devices, Costello said.

“This is totally unnecessary,” Costello told Fox News, adding that the raid was carried out to “make him look like he’s some sort of criminal.”

The New York Times was the first to report on the search, claiming that it may have at least partially stemmed from Giuliani’s dealings in Ukraine. Giuliani wasn’t arrested or charged with a crime, and it’s not clear exactly why the former mayor’s house was searched.

“What they did today was legal thuggery,” Costello told the paper. “Why would you do this to anyone, let alone someone who was the associate attorney general, United States attorney, the mayor of New York City, and the personal lawyer to the 45th president of the United States.”

Costello also told the Wall Street Journal that in recent years, he had offered to answer investigators’ questions, but they declined.

FBI officials and Giuliani’s team didn’t respond to requests by The Epoch Times for comment by press time.

In late 2019, amid the first House impeachment inquiry against Trump about a conversation he had with Ukraine’s president in July of that year, prosecutors charged two alleged former associates to Giuliani, Lev Parnas and Igor Fruman, with unrelated crimes regarding alleged campaign finance violations.

On Jan. 20 of last year, Giuliani appeared on Fox News’ “The Ingraham Angle” and said he’s no longer close to Parnas, a former client, and claimed that Parnas was lying about some of his claims.

“Lev is someone I was close to. Obviously, I was misled by him. I feel very bad. I still feel sorry for him. I’m not going to respond to him for each and every one of the misrepresentations he’s made, because there were so many,” he said. “If I’m called as a witness, I’m prepared to do it.”

Before that, Giuliani, who was Trump’s personal attorney at the time, told CNN in 2019 that he asked Ukrainian officials to look into then-candidate Joe Biden before he noted that he “asked them to look into the allegations that related to my client [Trump], which, tangentially, involved Joe Biden in a massive bribery scheme, not unlike what he did in China.”

“I asked the Ukraine to investigate the allegations that there was interference in the election of 2016 by the Ukrainians for the benefit of Hillary Clinton,” Giuliani said.

When FBI officials searched the home of Trump’s former lawyer Michael Cohen the former president said it was part of a “witch hunt” against him on behalf of the federal law enforcement agency. Cohen was eventually convicted and sentenced, spending more than a year at a federal prison near Otisville, New York.

Trump has long said that the Russia inquiry and impeachment against him were part of a politically motivated campaign to undermine his presidency and the legitimacy of his 2016 election win.