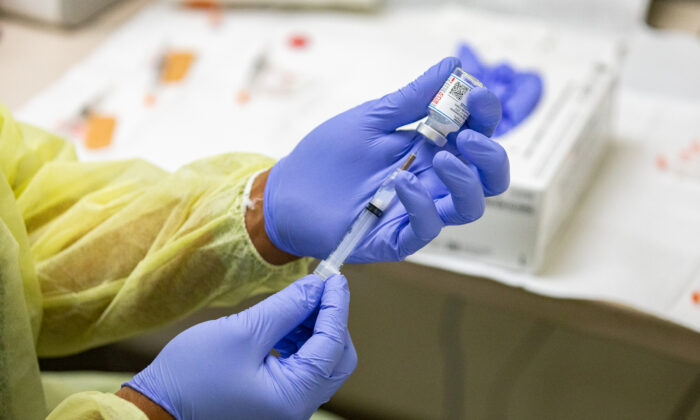 A Food and Drug Administration (FDA) advisory panel voted unanimously on Oct. 14 to recommend that the agency allow millions of Americans to get a booster shot of Moderna’s COVID-19 vaccine.

The 19–0 vote came after hours of discussions and presentations in an all-virtual meeting.

Moderna officials presented data from clinical trials, including a small trial that studied the safety and effectiveness of a booster shot, as did officials from Israel, one of the first countries in the world to start giving booster shots, and the FDA, which performed an analysis of Moderna’s data but didn’t support or oppose the company’s application for an emergency use authorization expansion.

The FDA can overrule the panel’s recommendations but rarely does so. If the recommendation is approved, anyone aged 65 and older will be able to get a Moderna booster shot if they’ve received the primary two doses of the Moderna series. People between the ages of 18 and 64 who are deemed “at high risk of severe COVID-19” or whose “frequent institutional or occupational exposure to SARS-CoV-2 puts them at high risk of serious complications of COVID-19” will also have access to the booster shot.

The boosters would be a 50 microgram dose for people at least six months after they’ve received their second dose, which is itself typically administered one month after the initial dose.

The primary two-dose series is 100 micrograms each.

Moderna said its small trial, consisting of just 171 people who got the regular primary series and a half-dose booster, showed a smaller amount could still bolster protection against CCP virus infection.

Officials discussed how data from other trials signal that the vaccine is still holding up well against severe disease, but that there’s been plummeting effectiveness against infection, particularly after the Delta variant became dominant in the United States.

Some panel members struck a skeptical tone on widespread boosters, pointing to the small number of people who got another shot and were studied and highlighting how some populations, including young, healthy people, don’t seem to need another shot.

“I’m not wild about a bunch of 20-year-olds going out and getting a booster dose, unless they’re at increased risk of either exposure or severe outcome,” Dr. Mark Sawyer, professor of clinical pediatrics at the University of California–San Diego School of Medicine and a temporary panel voting member, said before the vote.

The Centers for Disease Control and Prevention advisory panel will ultimately make the decision on who should get a Moderna booster, Sawyer said, though it’s in danger of being overruled by the agency’s head, as happened with Pfizer’s additional shot.

There was discussion about amending the third piece of the recommendation, but a number of members brushed aside the talk, in part because of a desire to match the recommendation the same panel gave for a booster for Pfizer’s COVID-19 vaccine in September. No one dissented.

“We already approved it for Pfizer. I don’t see how we can possibly not approve it for Moderna and not have most U.S. folks be completely confused. I know that’s not part of what we’re supposed to think about, but I think it’s a pragmatic issue,” said Dr. Stanley Perlman, a temporary voting member and a professor in the University of Iowa’s Departments of Microbiology and Immunology.

Dr. Cody Meissner, a professor of pediatrics at the Tufts University School of Medicine and a panel member, twice asked for evidence that people can be at high risk for serious complications based on their work. Dr. Doran Fink, an FDA official, said there was no “specific data,” but that there’s concern about so-called long COVID, or alleged problems that stem from COVID-19 and are seen even after somebody stops testing positive for the disease.

Meissner endorsed the recommendations, but warned the panel against voting for evidence-free language.

“If we can’t defend these recommendations based on evidence, it’s going to further complicate getting this vaccine into every single adult American, and that’s really what we want to do,” Meissner said.

Dr. James Hildreth, president and CEO of Meharry Medical College and a temporary voting member (pdf), challenged Meissner, saying that the only evidence he needed for the occupational risk advice was that minorities are more likely to have underlying conditions, putting them at higher risk of severe cases of COVID-19.

Perlman said the piece was important because the United States can’t afford to have health care workers test positive for COVID-19, because that means they’ll have to miss work, even if they’re not showing symptoms.

Many spoke in favor of advising the FDA to widen the emergency use authorization again, after previously allowing people with weak immune systems to get a third dose of the vaccine. They said the fact that the Pfizer and Moderna vaccines are similar means that data regarding Pfizer booster shots, including virtually all the information from Israel, informed their decision, as did the millions of Americans who have already gotten the third shot.

“We need boosters in some populations,” Sawyer said.

Dr. Patrick Moore, a temporary voting member and a professor at the University of Pittsburgh Cancer Institute, said his vote was based on “more of a gut feeling” than serious data.

“The data itself is not strong but it is certainly going in a direction that is supportable of this vote,” Moore said.

Panel members are set to meet again on Oct. 15 to consider whether to advise the FDA to expand authorization for Johnson & Johnson’s vaccine.