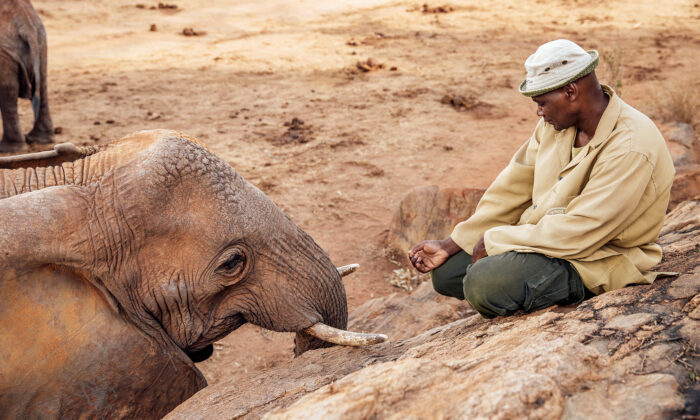 After being rescued and reintroduced to the wild over a decade ago, a once-orphaned elephant has returned to pay a visit to her keeper. Best of all, she brought her own baby to meet him.

The elephant, named Sunyei, showed up to visit Sheldrick Wildlife Trust’s head elephant keeper, Benjamin, at their Ithumba site in Kenya. On Sept. 1, the Trust shared moving footage of the elephant and her keeper’s reintroduction on Facebook.

In the short clip, the now-fully-grown Sunyei nuzzles and snacks from her rescuer’s hands as Benjamin sits patiently beside his old friend. Sunyei’s baby stays close to its mother’s side as the pair catch up.

“Fifty years ago, it was considered impossible to raise an orphaned elephant from milk-dependency, let alone reintroduce them into the wild,” the Trust captioned. “Sunyei is testament that this is possible under the right circumstances, and, once wild, these orphans can thrive and even start their own families!”

Sunyei was discovered alone in the African wilds almost 20 years ago, having been separated from her mother as a newborn calf. After being taken in by Sheldrick Wildlife Trust, she bonded with Benjamin, her primary keeper, the man responsible for resident elephants’ round-the-clock primary care, health, and happiness.

At the Ithumba site, Sunyei learned the skills she needed to fend for herself, eventually leaving of her own volition in 2009.

“While it might have been more than a decade since Sunyei chose to return to the wild, it seems she has never forgotten the kindness that was shown to her,” Rob Brandford, the Trust’s executive director, told The Dodo.

“That a fully grown, wild-living elephant had the desire to introduce a new baby that very same morning to the human family that raised her, speaks volumes about their intelligence and their sense of family,” he marveled.

Since Sunyei and Benjamin’s reunion, the mama elephant has returned several times with her baby. All interactions are on her terms, making her ongoing bond with the man who raised her even more meaningful.

The Trust’s orphan program has successfully rescued and returned over 160 orphaned elephants to the wild in its 40 years of operation. Every rescue is adapted to the individual elephant’s needs, from specially fortified milk formula to weather and resource monitoring as calves move into conservation areas known as “reintegration units,” ready for release.

“Perhaps most remarkable is the time it takes,” the Trust posted on Facebook. “Orphaned elephants require an exceptional amount of nurturing and need to be taught basic survival skills, learning from their keepers, from each other, and from wild elephants.”

This can take anywhere from 6 to 10 years, they explained; it is always the elephant that decides when they are ready to leave their human caretakers and fend for themselves in the great beyond.