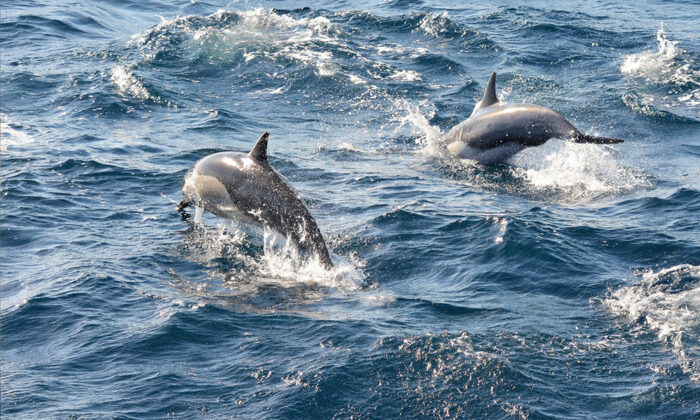 Lifeboat crews off the coast of Ireland rescued a missing swimmer who had been stranded at sea for around 12 hours after dolphins raised the alert.

A search party was launched from Castlegregory, County Kerry, on Aug. 22 when abandoned clothes were found on the beach. A volunteer All-Weather Lifeboat crew from the Royal National Lifeboat Institution’s (RNLI) Fenit branch was deployed by the Irish Coast Guard at 11 a.m. Fenit RNLI’s inshore lifeboat and a Rescue 115 helicopter joined the search party.

At 8:30 p.m. they spotted “a head above the water” among a pod of dolphins, according to RNLI’s press release.

“This was a very lucky individual,” Gerard O’Donnell, the operations manager of Fenit RNLI Lifeboat, said in the statement.

The volunteer-run organization stated that conditions were “excellent with calm waters and low tide” when the search was undertaken. However, when neither the swimmer nor clues had been found by the afternoon, the search was paused.

Scouting resumed at 6 p.m. at the request of the national police service of the Republic of Ireland, An Garda Síochána. Two lifeboats returned to the former search area with a helicopter overhead. This time, dolphins heralded success.

Spotting a large pod of dolphins surrounding the still-conscious swimmer about 2 1/2 miles off Castlegregory beach, lifeboat crews pulled him aboard and returned to Fenit Harbor to a waiting ambulance.

“After a long and exhaustive search, members of the lifeboat crew were overjoyed to sight the missing swimmer in the water,” O’Donnell said in the statement. “They had been scanning the water for any sign of movement, and were worried with light fading that they would not find anyone. … When the lifeboat crew found them they were a good distance from the shore and were exhausted.”

O’Donnell said that even at this time of year, the water can be very cold. Crews are uncertain as to exactly when the swimmer entered the sea, but the timeline suggests something in the region of 12 hours.

Speaking to the Irish Independent, RNLI coxswain Finbarr O’Connell—who calculated the swimmer’s likely location by mapping tides in the area—speculated that the dolphins had had a hand in the swimmer’s survival.

“Maybe [the dolphins] helped him in some way or another: who knows?” the coxswain told the Irish news outlet.

The swimmer was identified as a man in his 30s from County Londonderry, reported People. He was wearing nothing but swimming trunks and told rescuers he had been attempting to swim out to Mucklaghmore Rock, over five miles from the spot where his clothes were found.

According to the BBC, conservationists have since identified the pod of dolphins as being from a population of bottlenose dolphins that feed and reproduce in Scotland’s Moray Firth, known to the Irish coast since 2019. The Irish Whale and Dolphin Group confirmed this identification from the “shape and markings” of the dolphins’ dorsal fins, the BBC reported.

The RNLI advises all swimmers to keep themselves safe by letting someone know where they are going, and when they are expected home again.