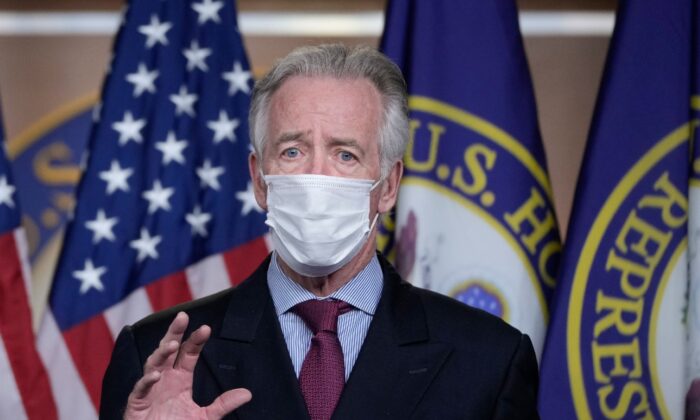 Republicans including the Ranking Member of the House Ways and Means Committee Kevin Brady (R-Texas) say Democrats’ plan to raise revenue in an attempt to pay for their $3.5 trillion spending package will increase taxes for small businesses as well as low and middle-class families, while Democrats argue it will only impact the very wealthy.

“It is devastating tax hikes on main street small businesses, just as they’re trying to come out of the COVID, plus, they double the death tax. There’s and a number of family-owned businesses and farms that will be hit by the death tax, and then finally President Biden, clearly, breaks his pledge by raising taxes on low income and middle-class families,” said Brady during an interview with Fox News on Monday.

Democrat lawmakers are pushing through a $3.5 trillion budget reconciliation spending package that does not need any Republican support since the reconciliation process allows passage with a simple majority.

“It will kill American jobs, drive prices up even higher on families, and I think hook a whole new generation of the poor on the government dependency,” said Brady. “This is an economic surrender to China, Russia, and Europe that will drive American jobs overseas, and could kill up to 3 million American jobs over time.”

During the House Ways and Means Committee’s Sept. 14 markup of their portion of the $3.5 trillion budget, Chairman Richard Neal (D-Mass.) said Democrats’ tax plan will raise taxes on the wealthy, making the tax system more equitable.

“Instead, our tax system lost its progressive power at the top end because many of the wealthiest taxpayers in America have had a chance to play by different rules than those of ordinary wage earners. We are taking a significant step toward leveling the playing field. Specifically, we propose to increase the top individual rate to 39.6 [percent], and to increase the top capital gains rate to 25 percent, and add a 3 percent surtax for individuals making over $5 million,” said Neal.

“In line with President Biden’s pledge and our party’s values, we’ve ensured that none of these tax increases will affect households earning under $400,000,” added Neal.

“So, you will hear claims today that need to be fact-checked in advance. One, you’ll hear that this has no impact on America’s small business. That’s not true. Raising the individual rate raises the rate on small businesses, most of whom file as individuals,” said Brady in response to the chairman’s remarks.

Senate Minority leader Mitch McConnell (R-Ky.) during a speech from the Senate chamber on Tuesday said the Democrats’ tax proposals will give tax breaks to Democrat special interest groups.

“Isn’t that fascinating. … Their legislation would allow ordinary Americans’ charitable deduction on top of the standard deduction, to expire. But they’d replace it with a brand new tax break of almost exactly the same dollar amount for union dues that go to big labor,” said McConnell

“They’re scrapping America’s extra deduction for donating to charity and replacing it with a special subsidy for union dues for big labor. Really, you can’t make this stuff up. Sorry, Red Cross; sorry, local churches and houses of worship; sorry, soup kitchens. Democrats think the Teamsters and the SEIU need the money more than you do. And they aren’t the only group that Democrats favor, who literally make out like bandits,” said McConnell.

“More than half the benefit of the so-called SALT [state and local tax] policy would go to the top 1 percent of households. There’s also a special tax break for people who choose to purchase expensive electric cars,” said McConnell, adding that this would benefit the wealthy in U.S. cities.