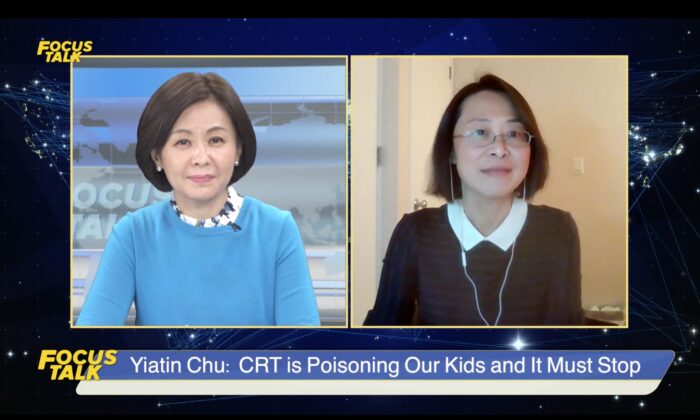 Yiatin Chu, co-chair of the New York City chapter of the Foundation Against Intolerance and Racism (FAIR), in an interview on Focus Talk on May 18, 2021. (Screenshot via Focus Talk/Epoch Times)
US News

Yiatin Chu, an Asian mother of two and co-chair of the New York chapter of the Foundation Against Intolerance and Racism (FAIR), said that critical race theory is “racist” and is having a harmful impact on schoolchildren.

In an interview with NTD’s “Focus Talk,” Chu acknowledged the presence of racism in the United States, but disputed the notion of systemic racism, a concept pushed by critical race theory advocates.

Chu described critical race theory as the idea that disparate outcomes, such as academic competency, can be reduced to a single variable—race. Advocates of the theory, which she said is increasingly being taught at pre-college levels, push the socialist notion of equality of outcome, and blame differences in outcomes on entrenched privilege while dividing people into “oppressors” and their victims, the “oppressed.”

She said that the growing prevalence of critical race theory in the classroom means “everyone’s being judged, everything is being looked at.

“Every picture you look at, every classroom you look at, people are looking at it by race—and it’s just an awful thing to have to think this way,” she said.

She said that she stepped into education advocacy in response to mounting pressure on selective, exam-based admissions schools, which she said “were being targeted for being racist.”

Advocacy groups didn’t like the fact that the outcomes of the admissions process led to a high proportion of Asian students admitted relative to their representation in the general population, she said.

“And I’m thinking, well, what’s so wrong about that? You know, the admissions are fair, you’re taking a test. These are objective tests that really don’t have any racial aspect to it. But they were being targeted,” Chu said.

Many of these schools have replaced the race-blind admissions process with race-based lotteries and quotas, in a bid to make the demographics of the student population more closely match that of the general population in the region, she said.

“It was about seeing the world through the outcomes of disparate racial demographics and data like that,” Chu said. “And the way to correct it was to be anti-racist, which is, you know, it sounds good, but anti-racist is actually a new way of getting racist outcomes.

Chu also addressed the issue of “equity,” a word she laments has become hackneyed and distorted by left-leaning advocacy groups, who push for equality of outcome, rather than equality of opportunity.

She said policies should focus on providing students with greater access to basic needs and learning opportunities, rather than trying to deny access to schools based on race.

“What I find … really sad about this whole [critical race theory] thing is … these are neighbors. These are colleagues. These are classmates. And people are really forced to look at each other purely based on their race,” she said.

Chu said the driving force behind the establishment of FAIR was about “being pro-human.”

“What Martin Luther King wanted for everyone is to be able to be judged by the content of their character and not the color of their skin,” she said.

Proponents of critical race theory have argued that it’s needed to demonstrate what they say is “pervasive systemic racism” and facilitate rooting it out.