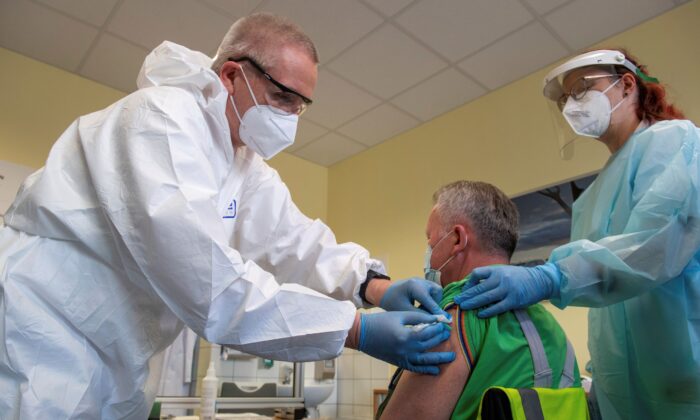 The European Union’s drug regulation agency on Wednesday said there is a “possible link” between the AstraZeneca CCP virus vaccine and “very rare” blood clots but recommended that vaccinations continue and stressed the benefits outweigh the risks.

The European Medicines Agency (EMA) “is reminding healthcare professionals and people receiving the vaccine to remain aware of the possibility of very rare cases of blood clots combined with low levels of blood platelets occurring within 2 weeks of vaccination,” the agency said in a statement Wednesday.

The statement continued: “So far, most of the cases reported have occurred in women under 60 years of age within 2 weeks of vaccination. Based on the currently available evidence, specific risk factors have not been confirmed.”

The Epoch Times has contacted AstraZeneca for comment. The pharmaceutical giant and the World Health Organization (WHO) have previously stated that its studies have found no higher risk of clots due to the vaccine.

EMA officials reviewed several dozen cases that came mainly from Europe and the United Kingdom, where around 25 million people have received the AstraZeneca vaccine, according to EMA’s statement.

The possible causes of the blood clot are still not fully known, said Marco Cavaleri, chair of the vaccine evaluation team at the EMA.

“In my opinion, we can now say it, it is clear that there is an association with the vaccine. However, we still do not know what causes this reaction,” he told Italian media.

On Tuesday, AstraZeneca and Oxford University, which developed the vaccine, paused a study of the shot in children while the UK regulator evaluates the link between the shot and rare blood clots in adults.

Officials in Spain’s Castilla y León region also suspended usage of the vaccine. Local health chief Veronica Casado said Wednesday that “the principle of prudence” drove her to put a temporary hold on the vaccine that she still backed as being both effective and necessary, reported AP.

“If there are in fact individuals of a certain age group that could have a higher risk (of clotting) then we need to adjust its use,” Casado said. “We are not questioning AstraZeneca. We need all the vaccines possible to reach the goal of 70 percent of the adult population.”