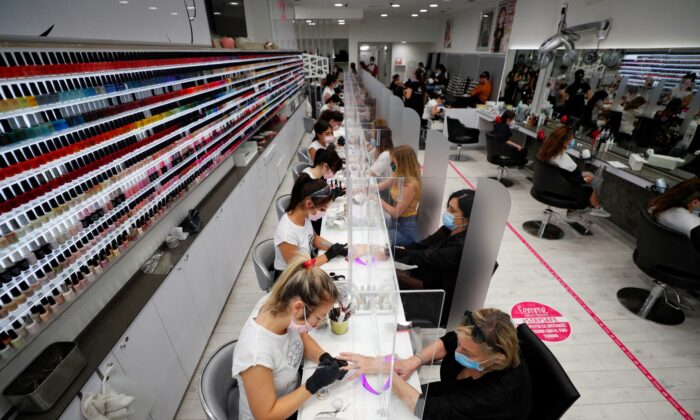 Women wearing protective masks work on the nails of customers at a beauty salon, as Italy eases some of the lockdown measures put in place during the CCP virus disease (COVID-19) outbreak, in Rome, Italy, on May 18, 2020. (Guglielmo Mangiapane/Reuters)
WORLD

The Italian government on Thursday approved among the strictest COVID-19 rules in the world by mandating that all private and public sector employees get the vaccine and show proof of vaccination, a negative test, or a recent recovery from infection, officials said.

The rules will go into effect on Oct. 15, which would penalize any worker with a suspension from their job with no pay. However, the mandate stipulates that they cannot get terminated from their job, according to provisions of the measure.

The country’s Council of Ministers, during a Thursday evening meeting, voted to approve the rules, Minister of Health Roberto Speranza said after the government approved the mandate, reported Il Gazettino.

“We will also make the network of active pharmacies more widespread” that are “capable of administering swabs [and] rapid antigen tests in our country,” Speranza said, adding that the government decree will likely boost vaccination rates in Italy.

The provisions also stipulate that private-sector employees who don’t have a green pass will not receive a salary starting Oct. 15, when the rule goes into effect.

While some European Union states have ordered their health workers to get vaccines, none have made the vaccine passports mandatory for all employees, making Italy the first to do so on the continent. Other countries like France have mandated vaccine passports to enter restaurants, gyms, some forms of travel, and other venues.

Over the past weekend, protests erupted in Italy over the green pass rule with reports saying that there were demonstrations in 120 cities.

Italy in March ordered health workers to get vaccinated or face suspension. As of today, 728 doctors have been suspended, the doctors’ federation said on Thursday. It was not immediately clear how many nurses or carers had refused to comply.

A similar measure in France came into force on Wednesday. Health Minister Olivier Veran said on Thursday that around 3,000 health workers had been suspended.

President Joe Biden, meanwhile, announced last week that he will direct the federal government to penalize private-sector employees and businesses to force workers to either submit to weekly COVID-19 testing or get the vaccine. The announcement drew significant criticism from Republican governors and attorneys general, who have threatened to file lawsuits against the administration.

Arizona Attorney General Mark Brnovich became the first state official to sue the Biden administration earlier this week, arguing that the government violates the Constitution by mandating that U.S. citizens get the vaccine while illegal immigrants don’t have to.