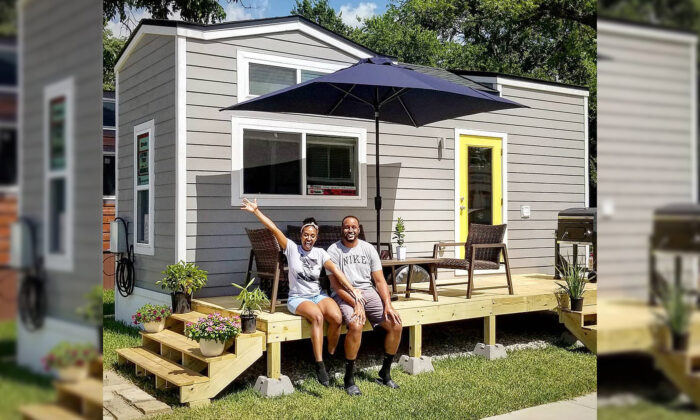 Ko and Marek Bush outside their tiny home.(Courtesy of Living Tiny with the Bushes)
Inspired

Determined to get out of their six-figure debt, couple Marek and Ko Bush drafted a plan to downsize their debt by miniaturizing their home.

Two years later, after moving into the tiny house they designed, the couple became completely debt-free—and ready to tackle the next project in their lives: building a family. Their baby girl was born in March.

In 2017, Marek and Ko, from Kansas City, Missouri, were living in a 1,100-square-foot (102-square-meter) loft apartment in Florida. After doing the math and realizing they were $125,000 in debt, they set out drafting a budget to fix this.

“We decided we were going to pay off everything we owed,” Marek told Business Insider. Marek, who works in retail security, started looking into tiny homes, suspecting that downsizing would massively reduce their expenses.

Ko, a teacher and waitress, wasn’t convinced right away.

“It was the change of it all,” she explained. “We had a lot of furniture, and I just wasn’t ready to let go of it. But once I got it through my head that it was just material things, I was like, ‘You know what, it’s a good idea.’”

First, they set up a showroom in their loft apartment, inviting potential customers to peruse the furniture. That included a seven-piece bedroom set and a large sectional couch, neither of which would fit into their 200-square-foot (approx. 18-square-meter) soon-to-be-home.

They sold everything, amassing a lump sum in cash to pay off a large chunk of their debt.

In hindsight, Marek realized he and his wife had accumulated stuff “just to fill up space.”

Next came the downsize. Not only were the couple planning to move into a tiny home, they also had their sights set on designing it themselves.

The Bushes collaborated with Cornerstone Tiny Homes in Florida to draft a tiny mobile home floor plan that included all the features and comforts most important to them. They even showed off the features of the home in a Tiny Home Tours video on YouTube.

The living room houses a 55-inch TV and three-seater sofa with storage underneath; the multi-purpose bathroom/laundry room includes a full-size walk-in shower; the kitchen is customized with a stainless steel stove, microwave, and large wooden countertops.

“I like to mount a lot of things in a tiny house,” said Marek, who made sure the ceiling accommodated his 6-foot 5-inch height, “because it helps you free up space so you’re not using counter space or floor space.”

The bedroom, complete with a king-size bed, is on the mezzanine level. Intricate paneling on the ceiling adds a personal stamp to the property—as does the quote by General George S. Patton on the wall: “If everyone is thinking alike, then somebody isn’t thinking.”

Marek and Ko paid for the $55,000 space after securing a low-interest personal loan from LightStream of SunTrust bank. The build took four months to complete.

After living in RV parks for 18 months, the Bushes settled at The Lake Dallas Tiny Home Community in Texas in April 2019.

Two years of budget-conscious living paid off. Marek and Ko annihilated their $125,000 debt and paid off the tiny home as well.

After such successful planning, the couple were well prepared to handle furloughs during the pandemic. “Throughout the debt-free process, we got really in tune with our budget,” Marek said. “Once we got furloughed from our jobs, it was very easy for us to go back to our budget and figure out what we can cut out and what we can shrink in order to have as little living expenses as possible.”

In December, the Bushes began plotting out a 4-acre property in their hometown of Kansas City, where they will “(prayerfully) be building a small Tiny House Community over the next 1–2 years!” Marek shared on Instagram.

The couple, who saw their baby daughter born on March 17, also have a YouTube channel, Living Tiny with the Bushes, where they share insights into marriage, money, and the tiny home lifestyle.