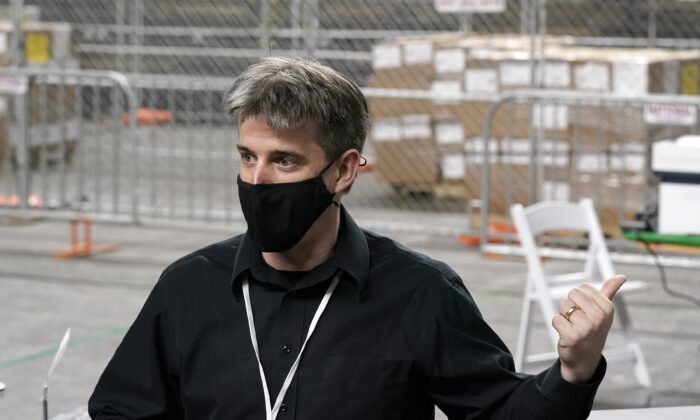 The Florida-based firm that’s overseeing the 2020 election audit in Arizona’s largest county on April 30 claimed that a court released its security plan to the public, despite knowing it was meant to be shielded from public view.

Cyber Ninjas submitted a slew of documents to the Maricopa County Superior Court in response to a recent ruling by Judge Daniel Martin, who rejected an attempt to file the documents under seal because of their sensitive nature and ordered them filed by noon local time on April 29.

But even the plaintiffs in the case, the Arizona Democratic Party, agreed that one exhibit, which gave an overview of the security for the audit, should be withheld from the public.

The seven-page plan appeared on the website of the court on April 29; it was available for anyone to view and download. The Epoch Times obtained the plan while it was publicly accessible.

According to a request for an emergency hearing, the court was aware the filing was meant to be shielded but still published it online for anyone to see.

At 11:02 a.m., about an hour before the deadline, lawyers for Cyber Ninjas informed Martin’s judicial assistant that the exhibit shouldn’t be publicly released. They offered to send over a stipulated motion saying as much.

The court, approximately 30 minutes later, asked for the motion. Lawyers drafted the motion and sent it to all parties involved. The court at 12:58 p.m. asked about the motion, and lawyers promptly informed the assistant that all parties had been provided with the proposed motion and they were waiting for approval. At 3:32 p.m., Cyber Ninjas filed the stipulation. Three minutes later, the judicial assistant responded, “Thank you.”

Additionally, the court’s clerk said in an entry from 3:20 p.m. that it received the stipulation and that the exhibit would be sealed.

But the security plans, known as Exhibit D9, were still released to the public.

“Although the Court had knowledge since 11:02 am that the Parties agreed that Exhibit D9 should be sealed and not made available to the public, the Court released Exhibit D9 to the public via Maricopa County’s Clerk of the Superior Court website,” Cyber Ninjas lawyers wrote in the request for a hearing.

The exhibit began to appear on the internet after 6 p.m. and later that evening, a local media outlet published an article describing details of the exhibit.

The request was for an emergency status conference regarding what happened.

The court and Cyber Ninjas didn’t respond to requests by The Epoch Times for comment.

Martin was appointed by a Democratic governor. He took over the case, an attempt to block the audit by Arizona Democrats, after another judge had recused himself. On April 28, Martin rebuffed a bid to immediately halt the audit.

The audit started on April 23 and is scheduled to continue until May 14. Workers are reviewing ballots cast and machines used in Maricopa County in the 2020 presidential election.