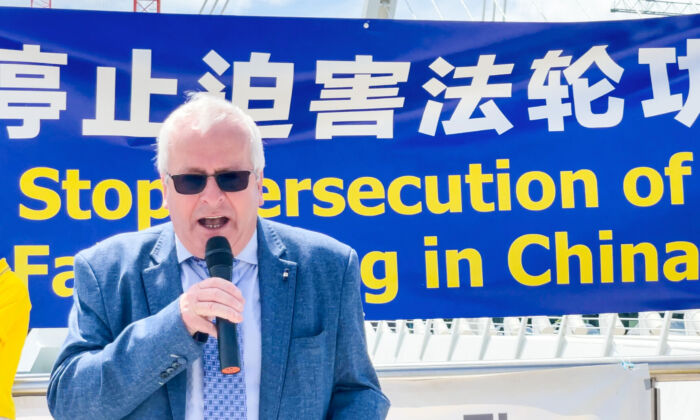 DUBLIN, Ireland—Meditation, faith, and self-determination are rights bound to people “from the womb to the tomb,” but those upholding the fundamental freedoms in China suffer persecution, says an Irish politician.

Waving hands to people in symbolic yellow T-shirts at a rally, Independent TD (Teachta Dála, member of the lower house of Irish Parliament) Mattie McGrath condemned the “wrong” persecution of spiritual adherents of Falun Gong in China “from the bottom of my heart.”

“So, I, at the moment, am fighting back for our freedoms in this country; trying to maintain our freedoms: enhance them, instead of having them restricted and removed,” he said to attendees on June 14.

“I am here to support you,” he added.

Dozens of people gathered outside the landmark Convention Center in Dublin on July 14, meditating quietly with banners at the back, calling for an end to the brutal persecution of Falun Gong in China.

Senator Malcolm Byrne came to the rally to voice his support. “Those who practice Falun Gong as well as many other minorities continue to suffer oppression at the hands of the Chinese Communist Party. Ireland calls on the Chinese government to respect human rights,” said Byrne in an email to the Ireland Falun Dafa Association.

Marian Harkin TD also called on the Irish government to be vocal about the human rights violations in China at the rally. Although Ireland is a small country and people are restricted somewhat in its leverage against such a power.

She told a member at the rally that Ireland has always punched well above its weight in international circles. So, Irish people may have a lot of moral influence on these horrific matters.

Ruled by the Communist Party, People in China have been fired from their jobs, expelled from school, jailed, tortured, or killed simply for following their faith by practicing Falun Gong. Independent reports and government resolutions show that members of the faith group are the “one, probably the main source” of the organs, taken involuntarily, for transplantation.

The Chinese regime obscures the real number of victims from the public, but the incomplete records on Minghui.org, a website documenting the persecution, show a continuing occurrence even after 22 years—674 practitioners were sentenced for their faith in the first half of 2021.

“How can we stand by and watch this violation of human and civil rights take place,” said Senator David Norris in a statement.

“I am urging the Irish Government to intervene and speak out against these abuses and to do all they can to help,” said Norris.

The brutal campaign was launched by the former Party leader Jiang Zemin in 1999, who deemed the popularity of the spiritual practice to be a threat to his power. According to Falun info, there were 70 million to 100 million adherents seven years after the ancient practice was introduced to the public, which espouses the core tenets of truthfulness, compassion, and tolerance.

“I am very cognizant of the ongoing persecution of Falun Gong practitioners in China, and I would strongly support calls for these practices to end, and for the Chinese government to release anyone who has been detained for their religious practices, and to allow for freedom of worship for all,” said Joe O’Brien TD, Minister of State for Community Development and Charities.

“Freedom to practice religion is a human right and one that must always be upheld. Ireland and the international community stand with people who practise Falun Gong and I condemn any and all religious persecution in the strongest possible terms,” said Cian O’Callaghan TD.

As a small country, Irish lawmakers are vocal on the human rights abuses and restrictions of fundamental freedoms by the Chinese Communist Party. Twenty-three Irish lawmakers sent messages Commemorating World Falun Dafa Day on May 13, and condemned the ongoing persecution.

Deirdre Forde, Cork City South East Ward councilor, said, “the time may come for sanctions against the Chinese Communist Party” as the human rights violations continue despite repeated dialogues between the Irish government and EU with the Chinese regime.

Byrne, a member of the worldwide Inter-Parliamentary Alliance on China, raised the human rights crimes of the Chinese Communist Party in Parliament in June. He told The Epoch Times on July that Minister for Sport, Jack Chambers, confirmed that Ireland would not send any official government representative to the upcoming Olympic Games in Beijing.

Michael Segarty contributed to this report.

Correction: A previous version of this article incorrectly stated the date of the rally. The Epoch Times regrets the error.