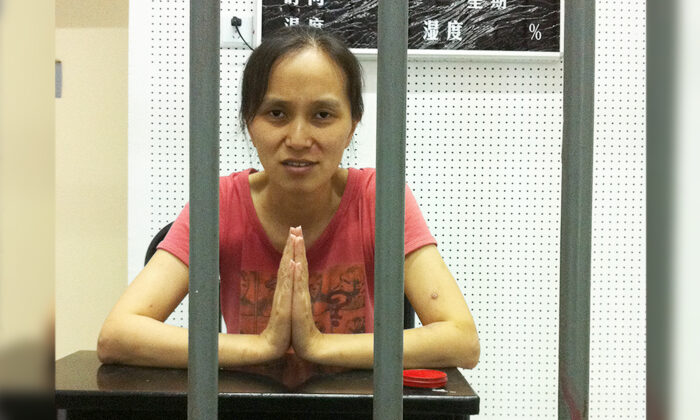 Chen Yinghua is unlawfully detained at the Nanjing Detention Center in China in July 2013 ﻿for refusing to give up her faith in Falun Gong. (Courtesy of Chen Yinghua)

‘Communism Has Infiltrated America and the World,’ Warns a Persecuted Chinese Refugee

A Chinese woman who fled overseas in late 2019 has endured a life many in the West would find unfathomable.

Unlawfully incarcerated and tortured in Chinese prisons for her faith, she describes her experience as “hell.” In fact, countless like her have suffered far worse at the hands of the Chinese Communist Party (CCP), and Chen Yinghua, 49, having escaped to North America, calls herself one of the lucky ones.

Coming from a totalitarian state where differing views are suppressed or canceled, Chen is noticing similarities emerging in North America. Speaking to The Epoch Times from her new home in Calgary, Canada, Chen said she hopes the world will soon wake up to communism’s true goal: to “rule all humanity and eventually destroy it.”

“I want to share my real-life experience with those who still have illusions about communism due to ignorance; with those who are numb and indifferent to the CCP’s destruction of Hong Kong, the United States, and even the world; and with those foreign agents who, due to their personal vested interests, are willfully lured in by the CCP to be its accomplice in the destruction of human society,” she said.

“I believe this is God’s will, to tell the truth about communism and about those who have been persecuted by it. This is saving humanity.”

Westerners are starting to experience the evilness of the leftist push. The CCP has subtly infiltrated all key areas of American and Canadian societies for decades. If you don’t flatly reject the CCP, people will soon lose their free will.
— Chen Yinghua, originally from China

In China, Chen was a peace-loving model citizen until her views diverged from those of the communist regime, which put her on its blacklist as a “state enemy.”

She was a college graduate who later worked for her husband’s electrical repair company, and she and her husband had a son together. At the time, they felt that things such as political suppression and torture were just shadowy rumors unrelated to them. But that changed in the year 2000, when she began practicing Falun Gong.

An ancient spiritual discipline rooted in traditional Chinese culture, incorporating teachings based on the core principles of “truthfulness, compassion, and forbearance,” Falun Gong is a form of qigong that involves five meditative exercises for cultivating body and mind. It’s currently practiced by an estimated 100 million people around the world.

The officially atheist CCP—under which divergent thoughts are regarded as a threat to its iron-fist rule—has been violently persecuting Falun Gong since July 1999, arresting, torturing, and killing untold numbers of adherents.

Chen says her experience of being persecuted for practicing her faith should sound a warning for everyone about what may be about to unfold in the West and particularly in the United States.

“Socialism and communism are a scam,” she said. “Socialist changes could happen at any time, and the kindhearted American and Canadian people will lose their most precious thing—free will.

“What kind of future does socialism bring to a country and its people? China and the Chinese people provide a lesson. The current state of the Chinese people is the future of those who want to take the socialist road. You’ll see that if you take a step back, communism takes a step forward, and sooner or later you have nowhere to go.

“Westerners are starting to experience the evilness of the leftist push. We have experienced this already in China. The CCP has subtly infiltrated all key areas of American and Canadian society for decades.”

Chen said her mother, Jinling, was the first in her family to practice Falun Gong, starting in 1998, before the persecution. That was also the year Chen’s elder brother emigrated to Canada.

“A month after my mom started practicing, all her illnesses were suddenly cured. She had recovered,” Chen said. “My mom then recommended it to me. I was 27 years old at the time.”

In 1999, Chen’s father-in-law, who was a Party secretary at an oil company, cautioned her before the onset of the persecution. “He told me the spiritual system my mom was practicing would soon be suppressed,” she said.

Shortly thereafter, state media and television began broadcasting propaganda reports during prime time to turn public opinion against Falun Gong. The Chinese mainstream society, brainwashed after generations of suppression, was soon on board with the state-run narrative about the practice.

“The communist regime said civil servants were prohibited from practicing; they would be fired and wouldn’t have a place to earn a living. For those who had been sentenced, they would also be fired from their job,” she said.

“The CCP doesn’t care about your life after that. Some were taken to the brainwashing centers to be ‘transformed.’ If they don’t transform, they have no place to survive.

“Once you’re affected by the CCP’s tyranny, you’ll quickly lose your family, your job, and all your relatives. No matter how high your social class is, you might become a prisoner at any time, and you may even be killed.”

The Crime of Belief

Chen said she was arrested for the first time in 2003 for the “crime” of distributing Falun Gong informational materials, such as CDs and brochures counteracting the CCP’s slanderous propaganda. She said no warrant is needed for police to enter a practitioner’s home, nor are charges needed to detain them—possession of Falun Gong materials is the key “evidence,” which can lead to multi-year prison sentences.

“Actually, the arrest process is also a looting process. The police usually confiscate money while making an arrest. The higher-ups want evidence, while the ones in the lower ranks want your valuables.”

Chen said her crime was that her thinking differed from the CCP’s. While in a detention center, a policeman told her: “You’re different from the other criminals. They did commit a crime. But for you, it’s just that your thinking was different from ours.”

She was tortured in prison before being released. Her second arrest was in 2013.

“The police put a black sack over my head,” she recalled. “I don’t know if they were worried that I would be recognized or that I would recognize them. When they stuffed me into a vehicle, I shouted.”

She was taken to Nanjing Detention Center, where she was again tormented before being released. Her third arrest, in 2014, led to a four-year prison term at Hebei Women’s Prison No. 13, in Shijiazhuang city, Hebei Province.

“Being imprisoned for four years made me experience darkness like never before, even though I resisted the persecution as much as I could,” she said.

During her multiple arrests, she said, large volumes of blood and DNA samples were taken from her. Such biometric sampling is uniform for Falun Gong and other religious detainees. According to the U.S. State Department’s “China 2020 Human Rights Report,” an NGO noted in a report that this procedure “could indicate evidence of illicit organ trafficking.”

The prisons, detention centers, and labor camps unlawfully holding Falun Gong adherents and other prisoners of faith aim to “reeducate” or “transform” them, with force and coercion, to extract a “guarantee to stop practicing.”

During her detention, Chen went on a hunger strike to protest her unlawful arrest. As a result, she was force-fed several times, with each session lasting two to three hours. She was also torturously tied to a “tiger bench” and had tubes rammed through her nose, causing considerable bleeding and vomiting.

Other routine tortures included depriving her of sleep, not allowing her to use the bathroom or wash, coercing criminal inmates to choke her unconscious or beat her head against a wall, and more.

“None of the torture could change me,” she said. “What really destroyed my will was the officials making things difficult for other prisoners who sympathized with me. Someone was reprimanded and punished by many supervising policemen for sending me two lucky clovers to try to comfort me.”

The time finally came when Chen heard beatings from the corridor outside her cell, and under the pleading of other prisoners, she caved and signed a statement saying she would give up her faith—an act she describes as a form of spiritual death.

“At that moment, I really felt that a part of me was dying,” she said. “My mind was very slow to react, and I started to look like a walking corpse. I felt like the current world was a living hell, with its existence rooted in the varying degrees of ignorance of and submission to communism.”

Without her faith, she said, life was “meaningless and worthless.” Moreover, she was forced to endlessly repeat her condemnation of Falun Gong, reasserting her guarantee in daily “reeducation” sessions.

After four years of “hell,” Chen was released.

Chen was extremely lucky in that her relatives, including her mother and young son, had made it overseas and reached out to officials in the United States and Canada to bring political pressure to bear on the prison where she was incarcerated.

Such international exposure would embarrass the CCP on the global stage, so it’s likely that prison authorities dared not kill her or harvest her organs, nor harm her too severely, for fear of being held accountable. The vast majority of prisoners of faith, however, lack such international support and suffer horrors beyond imagination.

After her release, Chen obtained a visa and traveled to Canada in 2019, where she eventually became a refugee. On the flight, she suddenly experienced what it meant to be truly free.

Upon reuniting with her family in Canada, her son didn’t recognize her, as so many years had passed, and Chen saw that her own mother had aged prematurely.

Chen sent some photos back to practitioners in China, and they replied: “You’re free now. We really envy you.”

The persecution is vast in scale, and Chen’s account exposes but a fraction of it. The persecution at large remains obscured by CCP censorship and those willing to toe the party line.

Warning the world from her home in Calgary, Chen said: “Living in Canada, you can feel that this is a place for humans to live in. In China, it’s not a place for humans to live in. That place is hell. There are people in that place too, but they don’t dare to say they’re humans because there are ‘beasts’ waiting on the sides. This is how evil it is.

“If people are not able to take action to resist and push back against the CCP, what the Chinese people are facing today will be everyone else’s tomorrow.”

Jocelyn Neo and Arshdeep Sarao contributed to this report.