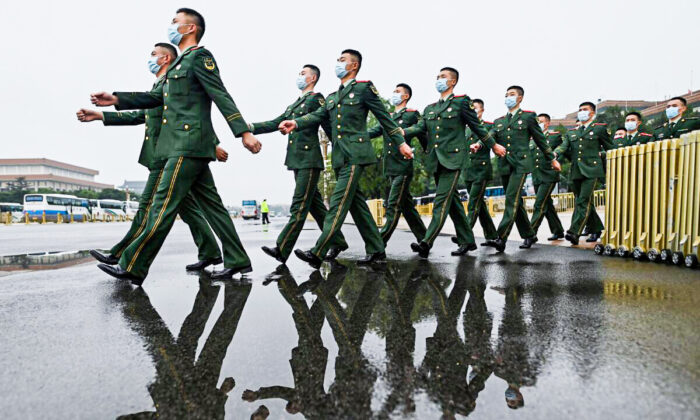 Military delegates march at the Great Hall of the People in Beijing on Oct. 9, 2021. (Noel Celis/AFP via Getty Images)
Military

China’s ruling regime could be more willing to engage in international coercion and armed conflict in East Asia due to its efforts to reach nuclear parity with the United States, according to foreign affairs experts.

This is because the United States and China are entering a state of “mutual nuclear vulnerability,” according to Caitlyn Talmadge, a senior fellow at Washington-based think tank Brookings Institution.

“If neither side is going to use its nuclear weapons because of the state of mutual vulnerability, what’s left is the conventional balance of power,” Talmadge said.

“And the conventional balance of power, I think many in the region would say, is not looking that favorable for the United States and its allies.”

Talmadge’s comments reflect a growing concern among the defense and security communities that the CCP’s efforts to modernize its military and develop 1,000 nuclear warheads by 2030, as projected by the Pentagon, could allow it to coerce the United States and its allies away from interfering in any conflicts it initiates.

A recent report by the U.S.-China Economic and Security Review Commission, a congressional advisory body, explicitly detailed this problem, commonly referred to as the “stability-instability paradox” in international relations theory.

The paradox maintains that two nations with similar nuclear capabilities will effectively deter one another from engaging in nuclear war for fear of mutually assured destruction, which creates stability.

The knowledge that neither side will actually use its nuclear weapons, however, increases the likelihood that the nations will pursue conventional warfare and indirect conflict, thus creating instability.

Thus, as Talmadge put it, the fact that “neither side can protect its population from nuclear attack by the other one, no matter who goes first,” could allow China to engage in further aggression and coercion in Asia, as its fear of U.S. nuclear pressure continues to wane.

Patricia Kim, a fellow at Brookings, said that diplomacy would be invaluable in such a situation and, as such, praised the first Biden-Xi summit earlier in the month as a meaningful step forward, despite its failure to produce any immediate breakthroughs.

“It was noted that the two heads of state talked about the need to put strategic stability on the bilateral agenda,” Kim said. “I see this as a good sign, and hopefully we’ll see more progress on this.”

“The good news is that there’s a recognition in both Washington and Beijing that this is not a sustainable path for the U.S.-China relationship, to be in a freefall, and that we need more dialogue at the leader-leader level through the working levels, to prevent conflict,” Kim said.

Kim also noted that it would be important for the two nations to work at more than just preventing conflict if they were to succeed, and suggested a joint effort to denuclearize North Korea as one potential avenue of opportunity.

Others were less optimistic about what meaningful outcomes, if any, could be derived from the summit.

“There’s no harm at all in having those conversations and having that engagement,” said Tom Wright, a senior fellow at Brookings. “I just wouldn’t be too hopeful that it’s going to lead anywhere. I think what we need to focus our efforts on, even as we sort of engage in that track, is try to ensure that we have a stable balance of power both at the nuclear level but [also] the conventional level.”

Nuclear Buildup Could Push US Out of Taiwan Conflict

Wright said that the regime’s nuclear expansion was at least partially intended to pressure the United States out of a potential conflict over Taiwan, which China considers to be a breakaway province.

“This nuclear buildup is part of a larger Chinese effort that I think we’re likely to see unfold in the coming years, to increase the vulnerability of the United States more generally,” Wright said.

“It’s designed, at least in part, so that if there is a conflict over Taiwan, it’s not just something that happens over there,” Wright added. “It’s something that could potentially happen over here in the U.S. too.”

One worry that drew discussion from the group was the possibility of a CCP blockade of Taiwan, the threat of which was recently described in a report by Taiwan’s Ministry of National Defense. The apparent lack of options at the United States’ disposal to counter such a move drew some frustration.

“I would like to have the United States with options that do not require trying to break that blockade through brute military force in the first instance as our only possible response,” said Michael O’Halon, a senior fellow at Brookings.

O’Hanlon worried that resorting to such could lead to various scenarios in which the United States could possibly lose a war, or otherwise be pressured to escalate a conflict against the Chinese mainland.

His concerns were similar to those raised by the findings of a wargame conducted by the Center for a New American Security, a Washington-based think tank, during which the United States struggled to react to a hypothetical Chinese invasion of a minor Taiwanese island without escalating the conflict to all-out war.

“I don’t like any of those scenarios very well,” O’Hanlon said.

To that end, O’Hanlon suggested that the United States speed up efforts to prepare for the possibility of economic warfare, or even limited military action in the Indian Ocean and Persian Gulf designed to disrupt China’s supply chains.

Both options would require the United States to quickly diversify its own supply chains and to stockpile precious minerals and other resources that would be crunched in wartime.

Wright agreed that all efforts should be made by the United States to ensure that Taiwan could survive under blockade, and effectively repel an invasion.

“It’s not as much about punishing China as it is ensuring that that blockade fails,” Wright said.