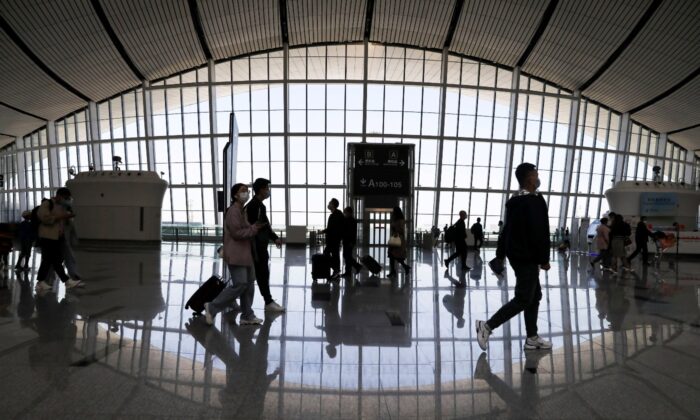 Travellers are seen at the Beijing Daxing International Airport on the first day of Labour Day holiday, in Beijing, China, on May 1, 2021. (Tingshu Wang/File Photo/Reuters)
INSIDE CHINA

SHENZHEN, China—Direct flights from the southern city of Shenzhen to Beijing have been suspended until at least July 1, booking apps showed, ahead of celebrations for the Chinese Communist Party’s founding in the capital on that date.

Of the cases, eight were recorded in Shenzhen, while 146 were reported in the provincial capital Guangzhou, though direct flights were still available to Beijing as of Wednesday, booking apps such as CTrip and Fliggy showed.

A Shenzhen government official who declined to be identified and two airline representatives confirmed flights from Shenzhen to the capital had been suspended.

Flights to other mainland destinations appeared to be operating as normal.

The airport in Foshan city, which borders Guangzhou and has seen 12 cases in the last month, announced that it was suspending all flights until July 7 due to the pandemic.

The Chinese city of Wuhan was the initial epicenter of the coronavirus pandemic, which first emerged there in late 2019.