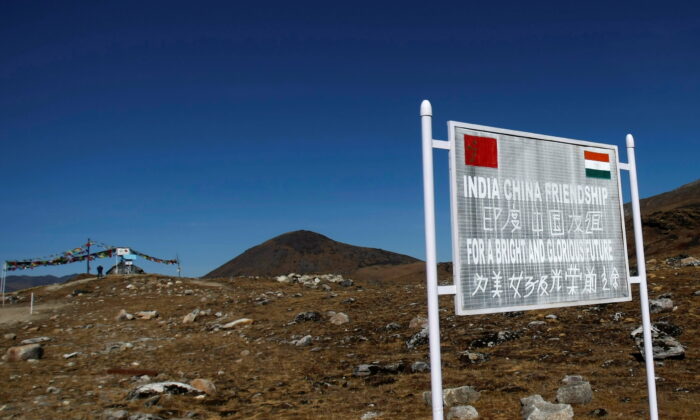 A signboard is seen from the Indian side of the Indo-China border at Bumla, in the northeastern Indian state of Arunachal Pradesh, on Nov. 11, 2009. (Adnan Abidi/Reuters)
International Relations

NEW DELHI—The Chinese Communist Party (CCP) has been building up a new kind of presence in the hotly disputed border region with India via a civilian resettlement strategy, according to Indian experts.

The CCP’s “well-off society” strategy involves building well-off villages in the name of elevating people from poverty and revitalizing rural communities. Experts say, however, that these villages play an additional role in the Tibet Autonomous Region that shares thousands of miles of disputed border with India.

They say the villages act as tools for the Chinese Communist Party’s (CCP) surveillance, border defense, and border domination, and, along with the the regime’s new land border law, are attempts at legitimizing the CCP’s claim to the disputed border with India.

In 2017, the CCP announced it would set up 628 “well-off society villages.” Last year, it announced that it had completed the construction of 602 of them, 200 of which are built on the Line of Actual Control or de facto border with India.

India, along with its five states, shares 2,167 miles of border with China. This border is not fully demarcated and is in the “process” of being confirmed, according to the government of India.

The situation on the border remains tense after last year’s bloody conflict in Galwan. The subsequent rounds of military talks were inconclusive while deployments on both sides have continued to multiply.

Abhishek Darbey, a research associate at the New Delhi-based Centre for China Analysis and Strategy, told The Epoch Times that while “well-off society villages” or “Xiaokang” are ostensibly a part of Chinese leader Xi Jinping’s nationwide push for poverty alleviation as spelled out in the CCP’s 19 Party Congress, the villages “are also intended to create a buffer inhabited by people loyal to the CCP” that will act as “watch posts along the border, help prevent infiltration by ‘pro-Dalai Lama elements’ and ‘hostile forces.'”

Since the 16th Communist Party Congress, the national strategy was to build a well-off society by 2021, according to Srikanth Kondapalli, a professor of Chinese studies at Jawaharlal Nehru University, New Delhi.

In the Chinese context, “a well-off society is roughly equivalent to European standards of per-capita income or other [human resource development] indicators,” he said.

Kondapalli said that the new Chinese land border law that will take effect from Jan. 1, 2022, and that sparked off a diplomatic war of words between India and China has provisions for the construction of well-off society villages.

“Incidentally, in this, the Foreign Affairs Committee had passed the land border law. And the deputy chairman of this foreign affairs committee of the [National People’s Congress] is General Zhao Zongqi, who was responsible for the Doklam crisis, was responsible for the Galwan crisis. He was the one who passed this land border law,” said Kondapalli.

In the 1960s, India and China, as part of their border dispute resolution efforts, started setting up the “border markers,” according to Kondapalli, but China started to unilaterally remove these two years ago as it started setting up its well-off society villages in certain regions.

Darbey said China has also started the construction of 206 industrial projects in the border areas and the roads of the administrative villages on the first and second lines of the border are unobstructed.

“The main power grid is extended to all border towns to realize postal services between villages, complete coverage of mobile communication networks, and guarantee of drinking water for the rural population,” said Darbey.

Kondapalli said he has seen a marketing video for residential buildings where the ground floor was for animals, the first floor was a market area, while the second floor is where the family lived.

“So, that is a typical one in a well-off society village. So this is the one that has come about in various regions.”

By constructing these villages, the Chinese regime is increasing the real-estate value of these regions and CCP members are given preferential treatment in terms of the “more prominent, better located” houses in the village, said Kondapalli.

The Chinese regime is settling Tibetans and other ethnic minorities in these villages scattered across the region, according to Kondapalli.

“They’re asking them to vacate [their traditional homes] and come to these settled well-off society villages, so their intention basically is internal surveillance. These people are basically indigenous people, they have their own customs, religions, etc. So, by bringing them from their natural habitats to these settled places, they will have more efficient surveillance on them,” said Kondapalli, adding that this is the “primary purpose.”

Most of the 200 villages constructed closer to the LAC are “roughly on the path” of the Dalai Lama’s escape to India, he pointed out, citing most of these are also on traditional cross-Himalayan routes that have existed for centuries.

“One of the reasons why they are setting up these well-off society villages will be for surveillance. So that in the 15th Dalai Lama scenario, they will be able to control all these areas,” said Kondapalli.

Regarding the “15 Dalai Lama scenario,” he was referring to the CCP’s reincarnation politics. The regime wants to control who Tibet’s next Dalai Lama will be, while Tibetans traditionally have appointed their own Dalai Lama via a unique process of locating and selecting who they believe to be the reincarnation of their spiritual leader, and if he is found within the Tibet Autonomous Region (TAR), the only way of escape would be via these routes.

Darbey said the villages on the border are built as a civil-military partnership to defend and consolidate the territories.

“Zhuang Yan, Deputy Party Secretary, TAR Executive Chairman, and Chief Commander of the Construction Work HQs of well-off villages, said in March 2018 that the aim of building the border village is to ensure consolidation of border areas and border security,” Darbey noted.

“It is to ‘align a high sense of political responsibility and historical mission with the masses of the border region’ and the Party Committee. An important role of the residents in the villages is to keep an eye on the movements of population and activities across the border.”

Kondapalli said the military has a role to play in these villages as it’s constructing many of them.

“If you carefully look at the local press, more often than not, the tenders for building these villages is going to the richest party members in that locality,” he said.

Kondapalli mentioned the case of two Tibetan women from the well-off society village of Yumei who wrote a letter to Xi Jinping. Xi replied to them, praising them for the border security measures.

“One of the women was given the model prize on the 100 anniversary of the Communist Party’s July celebrations. So, Yumei village has become famous for that,” he said.

“So across this stretch of the trans-Himalayan border areas they’re setting up these well-off society villages as a party-state outpost—party-army, party-state outposts [such as these] will be the beacons for the [CCP] in the coming future. So that is how they would also like to dominate the border areas,” said Kondapalli.

He said these villages will gradually also bring demographic change in the TAR as the children of Han-Tibetan couples will most likely be integrated with China and are less likely to rebel against the CCP.

Darbey said the well-off society villages are a “comprehensive and systematic project” to “continuously consolidate and enhance” its control of the border.