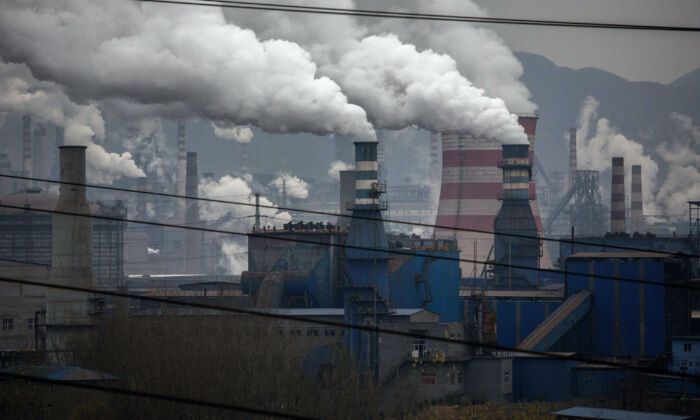 China emitted more greenhouse gases (GHG) than the United States and all other developed countries combined in 2019, according to a report published on May 6 by New York-based research firm Rhodium Group.

The report found that China alone was responsible for over 27 percent of total global emissions, with the United States being a distant second at 11 percent. India was ranked third with 6.6 percent, followed by the 27-country bloc of the European Union at 6.4 percent.

China’s emission reached nearly 14.1 gigatons of carbon dioxide equivalents in 2019, more than triple 1990 levels and a 25 percent increase over the past decade, according to the report. Global emissions in 2019 topped 52 gigatons.

Additionally, China’s per capita emission reached 10.1 tons in 2019, which increased nearly three times over the past two decades, according to the report. The figure was slightly lower than the 10.5 tons per capita average found across the 37 nations making up the Organization for Economic Cooperation and Development (OECD).

“While final global data for 2020 is not yet available, we expect China’s per capita emissions exceeded the OECD average in 2020, as China’s net GHG emissions grew around 1.7% while emissions from almost all other nations declined sharply in the wake of the COVID-19 pandemic,” the report stated.

China is the world’s largest coal producer and user. According to data from San Francisco-based NGO Global Energy Monitor, there were 1,082 coal-fired power stations operating in China as of January this year. Moreover, China is building 92 more stations and 135 are in the pre-construction phase.

Meanwhile, Beijing has also been financing fossil projects at countries that have signed up to China’s “Belt and Road Initiative” (BRI, also known as “One Belt, One Road”). According to the New York-based nonprofit Council of Foreign Relations, China was involved in 240 coal plants in these countries in 2016.

Beijing has locked BRI countries into a “coal-consuming energy future,” the AFP reported in December last year, with ongoing Chinese coal projects in countries including Zimbabwe and Pakistan.

BRI is an investment initiative Beijing rolled out in 2013 to build up trade routes linking China and other parts of the world.

In response to the Rhodium Group’s report, Sen. Rick Scott (R-Fla.) took to Twitter to warn about working with Beijing on climate change.

“Communist China is the world’s worst polluter & we can’t trust it will do anything to change course,” Scott wrote.

He added: “Addressing our changing climate requires real solutions, but we can’t pretend toothless agreements with mega-polluters like Communist China will do anything to advance that work.”

China and the United States pledged to cooperate on fighting climate change following a trip to China by U.S. special envoy for climate John Kerry in April. Kerry’s trip was criticized by several Republican lawmakers, including Scott, saying it was a fruitless endeavor.

Days after Kerry’s trip, Chinese leader Xi Jinping took part in a U.S.-led climate summit on April 22, during which he said that China would “strictly limit” its coal consumptions from 2021 to 2025, and phase it down in the following five years. Xi also reiterated his previous pledge in September last year about China becoming carbon neutral by 2060.

Kerry recently drew more criticism from several Republican lawmakers over his remark in an interview with Foreign Policy.

“We have differences on economic rules, on cyber. We have other differences on human rights, geostrategic interests, but those differences do not have to get in the way of something that is as critical as dealing with climate,” Kerry told Foreign Policy.

“Demanding the CCP stop committing genocide doesn’t ‘get in the way’ of climate change negotiations, and to imply climate issues are more critical than the lives of millions of oppressed people living in China is insensitive and improper,” McCaul stated.

In January, then-Secretary of State Mike Pompeo declared that the Chinese Communist Party (CCP) has committed genocide and “crimes against humanity” against Uyghurs and other minorities in Xinjiang.

Rep. August Pfluger (R-Texas), a member of the House Foreign Affairs Committee, took to Twitter on May 6 to say that Kerry’s remarks are “disgusting and morally wrong.”

“Communist China is committing genocide—forcing millions of #Uyghur Muslims into labor camps, subjecting many to crimes against humanity. The U.S. can’t turn a blind eye and brush off these abuses,” Pfluger wrote.