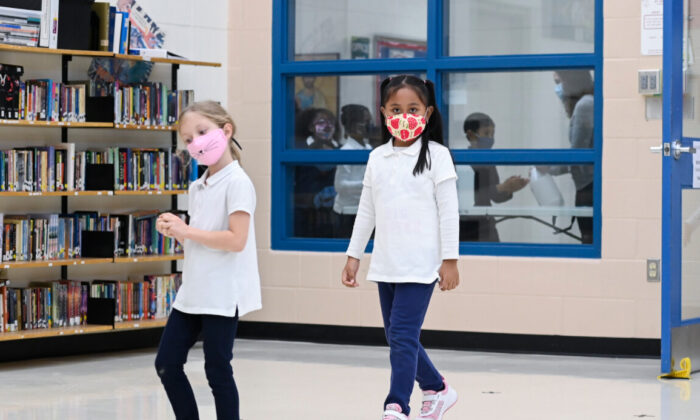 Children arrive in line using physical distancing before getting their picture taken at picture day at St. Barnabas Catholic School during the COVID-19 pandemic in Scarborough, Ont., on Oct. 27, 2020. (THE CANADIAN PRESS/Nathan Denette)
Health News

CDC Warns of ‘Alarming’ Increase in Child Obesity During Pandemic

The Centers for Disease Control and Prevention (CDC) said children and teenagers in the United States saw their body mass index (BMI) increase at almost double the normal rate during the COVID-19 pandemic, suggesting that COVID-19 lockdowns and rules may have contributed to the higher-than-usual weight gain.

According to the agency’s Morbidity and Mortality Weekly Report, released Thursday, officials noted that individuals aged 2 to 19 saw their BMI “increase approximately doubled during the pandemic compared to a prepandemic period,” adding that “persons with prepandemic overweight or obesity and younger school-aged children experienced the largest increases.”

“Obesity prevention and management efforts during and following the COVID-19 pandemic could include health care provider screening for BMI, food security, and social determinants of health, and increased access to evidence-based pediatric weight management programs and food assistance resources,” the CDC said.

The researchers estimated that 22.4 percent of the aforementioned age group were deemed obese in August 2020, while a year prior, they said that about 19.3 percent were obese. Individuals with obesity before the pandemic saw their BMI rate increase 5.3 times higher compared to before the pandemic.

Teens and children with moderate to severe obesity gained between 1 and 1.2 pounds each month on average, amounting to between 6.1 and 7.6 pounds in six months, said the health agency.

Children between the ages of 6 and 11 saw the greatest increases in their BMI change, reaching 2.5 times as high as compared with before the pandemic.

Since the start of the pandemic early last year, a number of school districts around the United States imposed stay-at-home mandates and employed virtual or distance learning regimes. The CDC noted that as schools and other venues reopen, it’s important that children and families are given “ample opportunities for proper nutrition and regular physical activity.”

“Accelerated weight gain, especially among children with overweight or obesity, can cause long-lasting metabolic changes that put children at risk for serious and costly co-occurring conditions, such as type 2 diabetes, hypertension, and depression,” the CDC report also said.

The agency’s research was based on a review of the medical records of around 432,000 kids and teens.

Delaware, Iowa, Ohio, and Texas joined the CDC’s list in 2020, the agency said, according to The Associated Press.