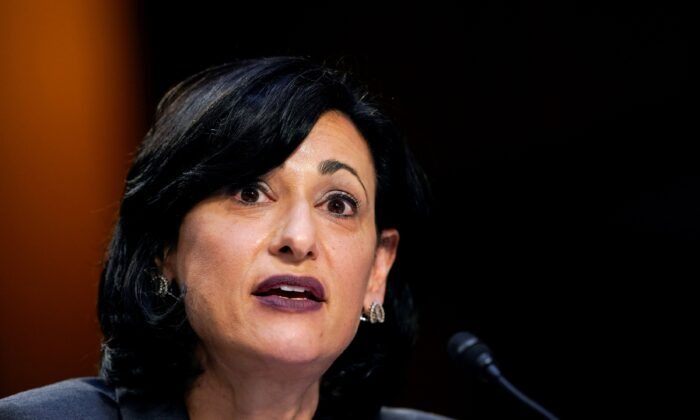 Dr. Rochelle Walensky, director of the Centers for Disease Control and Prevention, testifies during a U.S. Senate Health, Education, Labor and Pensions Committee hearing to examine the COVID-19 response, focusing on an update from federal officials, on Capitol Hill in Washington on March 18, 2021. (Susan Walsh/Pool via Reuters)
Executive Branch

CDC Director: Vaccine Passports ‘May Very Well Be a Path Forward’ in US

Centers for Disease Control and Prevention (CDC) Director Rochelle Walensky suggested that vaccine passport-style systems might be implemented in the United States amid the COVID-19 pandemic.

When asked in a TV interview Wednesday about whether the United States would mandate a European-style “health pass” system for nightclubs or bars, Walensky said, “That may very well be a path forward.”

The director further said that “in some fully vaccinated venues,” it “is possible” for a fully vaccinated individual to transmit and pick up COVID-19 “in those settings” and added that federal officials have “seen that” during studies.

Hours after the CDC issued its latest guidance, President Joe Biden told reporters that the federal government is considering mandating all federal employees to get the vaccine.

“That’s under consideration right now,” Biden told a reporter who asked whether the administration was weighing such a requirement.

White House press secretary Jen Psaki said on Monday that the administration had not made a determination about whether it would be legal for Biden to require federal employees to be vaccinated. The U.S. federal government is the country’s largest employer.

Biden plans to announce “next steps” on Thursday in the effort to get more Americans to receive vaccines.

“In the meantime, more vaccinations and mask wearing in the areas most impacted by the Delta variant will enable us to avoid the kind of lockdowns, shutdowns, school closures, and disruptions we faced in 2020,” he said. “Unlike 2020, we have both the scientific knowledge and the tools to prevent the spread of this disease. We are not going back to that.”

Vaccine passport-type systems have been flagged by Republicans and civil liberties groups like the ACLU as a significant violation of individuals’ privacy. GOP-led states, led by Florida, have passed measures barring state and local governments from imposing such systems, while Florida Gov. Ron DeSantis went a step further in May and signed a bill prohibiting all private businesses from doing so.

When so-called “health passes” were introduced in France and Italy in recent days, thousands of people demonstrated in major European cities over the past weekend, accusing the respective governments of using tyrannical coercion measures.