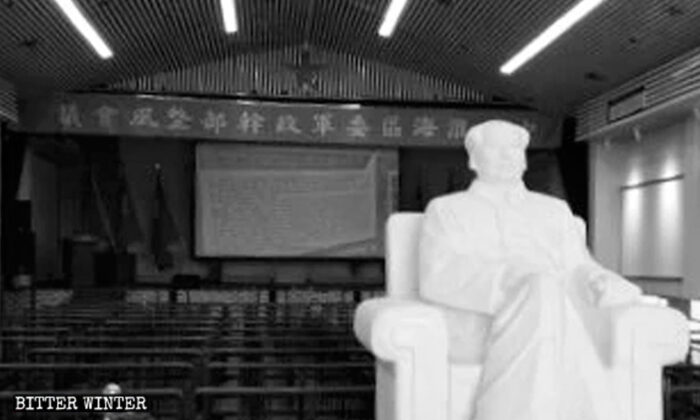 CCP Is Sinicizing Christianity, Other Faiths to ‘Align’ Them to Its Ideology: Chinese American Pastor

With the launch of the Chinese Communist Party’s (CCP) five-year “sinicization campaign” in 2018, the regime has been working to “re-create” spiritual beliefs that are compatible with its ideologies, according to a Chinese American pastor.

Bob Fu, the founder and president of the U.S.-based Christian nonprofit China Aid, told The Epoch Times in an email that his organization has “clearly detected intensified persecution every year” since the first year of the campaign.

“The Chinese government under the guidance of President Xi Jinping has escalated the persecution of people of faith with the ‘sinicization’ campaign, or to re-create religion to better align with the CCP ideals,” said Fu, who was a student leader during the 1989 Tiananmen Square demonstrations and a house church leader in Beijing. Fu and his wife fled to the United States as religious refugees in 1997.

Fu added that the sinicization campaign has “impacted those of all faiths in China.” “Tibetan Buddhists, Uyghur Muslims, Falun Gong practitioners, house church Christians, and Catholics have all been targeted by the Chinese government because of their religious beliefs,” he said.

With only a few months left until the 2022 Winter Olympics, Fu says it is “egregious” that China will be hosting the Games despite its record of “gross human rights abuses.” He said the 2022 Beijing Olympics “will be a test of the world’s conscience to see how we respond.”

According to Fu, the sinicization of Christianity is “directly linked” to the escalated persecution of house Christians. He said the act of sinicization is centered on gaining “control”—the key goal that the CCP “desires the most.”

“Sinicization gives the CCP a chance to re-imagine Christianity with the government at its center. That’s why we see portraits of Jesus being replaced by Mao and Xi in state-sanctioned churches,” Fu said.

However, Fu added that despite the communist regime’s “best efforts” to persecute Christians, “Christianity continues to grow rapidly.”

A week after the CCP marked its 100-year anniversary, the state-controlled Three-Self Patriotic Movement held a national conference on July 8 where churches were provided with “a model sermon” based on Xi’s centenary speech of July 1.

The pastors were instructed to hail “Long live the great, glorious and correct Chinese Communist Party,” and Christians were required to “trust the CCP,” reported Bitter Winter, an online magazine on religious liberty and human rights in China. A few days later in another conference on July 13 in Shanghai, the participants discussed speeding up the “sinicization of Christianity,” according to the magazine.

The communist regime has reached this key phase of distorting the Christian faith over the long years of persecution. Just in the year 2020, over 900 crosses were removed from churches and Bibles were confiscated. Apart from demolishing the crosses, the CCP also raided and closed down many house churches, including state-run churches.

“In 2020, we saw a rise in cases involving authorities threatening or detaining Christians, outlawing house churches, as well as increases in demolishing church buildings and crosses,” Fu said. “2020 is the worst year in persecution since the end of the Cultural Revolution.”

In the same year, it was reported that a state-owned university in China distorted a biblical story from John 8 about how Jesus forgave a woman who had committed adultery. The altered version, published by the University of Electronic Science and Technology Press, states that Jesus stoned the woman, saying “I too am a sinner. But if the law could only be executed by men without blemish, the law would be dead,” reported Bitter Winter.

According to UCA News, Catholics in China are “upset” over the incident. An anonymous priest said in the report that such distortion of the original text “is against morality and the law.” Another Catholic in China said that events distorting Christian faith and history have been “repeated every year,” but the Church has never received the “respect and apology it deserves.”

Fu doesn’t find it surprising, either. “It is sadly unsurprising to me that the CCP would go through such lengths to alter the Gospel,” he told The Epoch Times, adding that the true teachings call for “sacrificial change” and for one’s life to be centered on the Divine, “not the CCP.”

Some of the other instances of Christianity being sinicized include the following: the replacement of a painting of Mother Mary and the Christ child with a portrait of the Chinese leader Xi Jinping, religious believers being forced to attend compulsory training to memorize Xi’s quotes, and the portraying of Jesus and Mary in ancient Chinese attire, reported Bitter Winter.

“My eyes widened when I saw Mary with her hair tied in a bun like an ancient Chinese woman. It’s so bizarre,” a Three-Self churchgoer told Bitter Winter after seeing the illustrations of Jesus and Mary published in Tian Feng, a monthly Christian magazine.

Another 70-year-old Christian said: “The CCP has always talked about de-Westernization; it doesn’t allow Chinese people to believe in the God of foreigners, but I never expected that the Lord Jesus and saints through the ages would be transformed into Chinese people. The CCP has gone totally crazy.”

According to a 2019 report by Bitter Winter, a Three-Self church in Jiangxi province was “completely altered.” One house church leader said in the report that sinicization aims at “eliminating pure religious beliefs.”

“The ultimate goal is to eliminate Christianity, and also to eliminate Taoism, Buddhism, and Islam, with only communism remaining in the end,” the anonymous leader said.

Sinicization of Other Religions

The CCP’s sinicization campaign is multi-targeted; Tibetan Buddhists and Muslims aren’t spared either.

For instance, the China Islamic Association in Puyang County, Henan province, issued a notice in 2019 that the mosques’ Arabic-style domes and structures must be changed to ancient Chinese-style architecture to fit in well with the rest of the buildings located on the South Ring Road, reported Bitter Winter. The dismantling of the domes and minarets began thereafter.

“This is nationwide. Anything with these symbols must be altered. If you obstruct [the dismantling work], the mosque will be torn down,” an officer from the Religious Affairs Bureau told local Muslims, according to the report.

To force religious leaders to conform to the CCP’s ideologies of Marxism and atheism, they are required to undergo training at the Ningxia Academy of Social Sciences in Yinchuan City, an imam told the magazine in another report.

“The regime doesn’t allow us to preach in accordance with the teachings of the Quran and requires us to talk about state policies before expounding scriptures,” the imam said, adding that their preaching has to be recorded and sent to the authorities.

The sinicization campaign has equally impacted Tibetan Buddhism since the campaign’s beginning. According to Bitter Winter, the CCP has since intensified the demolition of temples and the removal of symbols related to Tibetan Buddhism.

In June 2020, the authorities in Qingdao City, Shandong province, issued an order to hide a white Tibetan Buddhist stupa on the Xiaolong Mountain because the stupa distracted the drivers and “affected the traffic on the nearby highway.”

According to the same report, other elements or words related to religion were also removed. The “wisdom eyes” that were painted on a signboard, which hangs at the entrance of a temple in Shandong province, were painted over in red color.

In the same year, authorities in Hebei province instructed Tibetan words to be removed from the Xingguo Temple, which was built in the Jin Dynasty (1115–1234), according to the report.