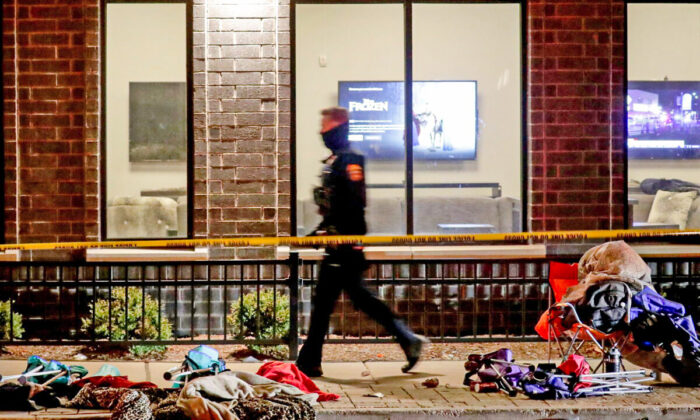 Police investigate after a driver plowed a vehicle through a Christmas parade in Waukesha, Wis., on Nov. 21, 2021. (Mike De Sisti/USA Today Network via Reuters)
Crime and Incidents

Officials in Waukesha, Wisconsin, confirmed on Sunday night that at least 5 people have died and another 40 are injured after a driver drove into people participating in a Christmas parade.

“The vehicle struck more than 20 individuals. Some of the individuals are children, and there are some fatalities as a result of this incident,” Waukesha Police Chief Dan Thompson told a press conference earlier in the evening.

Waukesha Fire Chief Steve Howard said that first responders had “transported a total of 11 adults and 12 pediatric patients to six area hospitals.” Families were also reported to have transported their injured to local hospitals.

Howard said that no specifics were available at the time on the injuries and fatalities as authorities work on notifying the families of the deceased.

According to witnesses and video footage of the incident, the driver plowed through people in the parade in a red SUV.

Footage of the attack, which was live-streamed and posted on the City of Waukesha’s Facebook page, shows the SUV speeding into the parade behind a school marching band. Other videos were uploaded elsewhere, including one that allegedly shows the SUV breaking a police barricade.

One video (disturbing) appeared to show the SUV running over people who were partaking in the parade.

Thompson said of tragic attack that the suspect’s vehicle had been found, and a person of interest is in custody.

“This is still very fluid investigation,” he said. “It’s unknown at this time whether the incident has any nexus to terrorism.”

One witness reported that the driver ran over “several elderly women” while firing out the window.

“Right in front of my family, this man drives through the parade hitting as many people as possible while shooting out the window,” one parade attendee wrote on Twitter. “He ran over several elderly women who were dancing in the parade and many others please … pray for everyone in Waukesha.”

Another witnesses told local media about the people they saw lying on the ground after the incident.

“As we were walking back in between the buildings that we saw an SUV crossover, just put the pedal to the metal and just zooming full speed along the parade route,” Angelito Tenorio, a West Allis alderman, told the Milwaukee Journal-Sentinel.

You can see a red SUV speed right past these band members, hear screams and then a law enforcement officer running. @fox6now pic.twitter.com/8lO5oRuP1I

Waukesha Police have issued a “shelter in place” order and have established a family reunification center, according to its Facebook page.

“There is no danger present,” Thompson said. He explained that a shelter in place order was in place only to assist police still canvasing the crime scene.

Thompson confirmed that a weapon had been discharged at the incident, but that police “do not believe any shots were fired from the vehicle.”

“An officer did discharge his weapon at the suspect’s vehicle to try to stop the vehicle,” he said. “No bystanders were injured as a result of the weapons discharge.”

Alderman Don Paul Browne told the Journal-Sentinel he had been marching in the front of the parade when the incident occurred.

“I am in shock,” he said. “This parade draws people from all over, even Jefferson County. I am numb. It is pretty upsetting.”

Waukesha County Executive Paul Farrow on Twitter asked for everyone’s prayers. “Please pray for our community tonight after the horrific events at the Waukesha Christmas Parade,” he wrote. “This is an unspeakable tragedy, affecting us all as we work to overcome an extremely challenging two years and resume our cherished holiday traditions. Keep the families affected in your thoughts as we work to offer whatever support we can.”