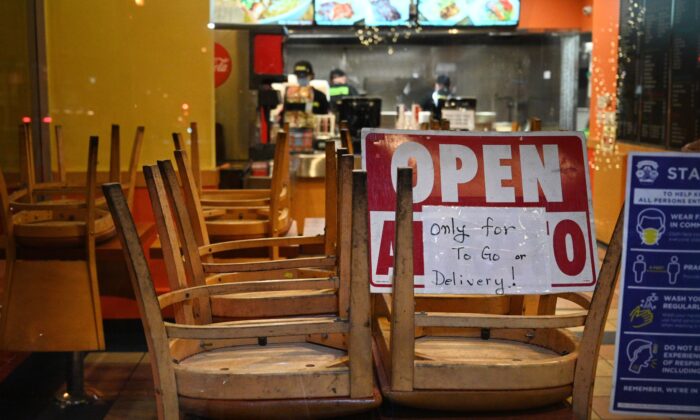 Employees work in a restaurant open for to-go or delivery orders only in this file photo taken in Burbank, Calif., on Nov. 23, 2020. (Robyn Beck/AFP via Getty Images)
Southern California

Authorities in a California city have erected a fence around a restaurant after the owners repeatedly defied COVID-19 safety protocols, prompting protests near the eatery, according to multiple reports.

The business, Tinhorn Flats Saloon & Grill on Magnolia Boulevard in the Southern Californian city of Burbank, was surrounded by a chain-link fence on Saturday to prevent the owners from reopening the restaurant, the Los Angeles Times reported.

A judge ruled on April 9 the owners cannot reopen the restaurant without new permits.

According to photos circulating on social media, crowds of demonstrators both in opposition to and in support of city officials closing down the business gathered near the fenced-in eatery.

“We will be out there to maintain peace and order,” Burbank Police Department Lt. Derek Green said. “The groups have been peaceful for the most part. But people who live around the small-business district have been impacted by the commotion.”

On April 6, the son of the restaurant owner was arrested after he was spotted by local police removing sandbags the city placed to prevent anyone from entering the eatery.

It was the third time Lepejian was detained and he is scheduled to appear in court at a later date, police said. It is not yet determined if any charges will be filed against him.

Burbank officials have levied a fine of about $50,000 against the restaurant owners since the start of the CCP (Chinese Communist Party) virus pandemic for repeatedly violating the city’s safety protocols and continuing to run the eatery while dining was banned by the county.

Lepejian refuses to pay the fine of about $50,000, asking city officials for evidence of him endangering the public.

“This has never been about safety or the public. It’s never been about that. This whole thing is about fear and control,” Lepejian said, adding that $40,000 to $50,000 in fines is “just tyranny and communism that’s occurring.”

Since the start of the CCP virus pandemic, more than 30,000 restaurants in Los Angeles have been closed to in-person dining. The shutdown included two rounds of months-long outdoor dining bans—causing frustration to many restaurant owners.

According to Yelp, California was reported as the state with the highest number of business closures early into the CCP virus pandemic.

About 30,000 businesses closed in the state from March 1 to July 10—about half of the closures temporary, and the rest permanent. Los Angeles County was reported as the city with the highest number of closures in the nation, at about 11,000, half of them permanent.

COVID-19 is the disease caused by the CCP virus, which is commonly referred to as the novel coronavirus that originated in China.

According to data from the Johns Hopkins Coronavirus University Resource Center, Los Angeles County has the highest number of COVID-19 deaths in the United States. As of Monday, the county has had more than 1.2 million positive cases and 23,390 deaths.