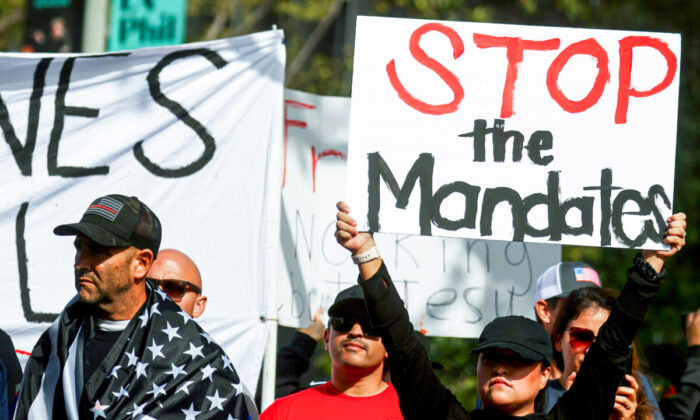 Protestors gather in Grand Park outside city hall at a March for Freedom rally demonstrating against the LA City Council’s COVID-19 vaccine mandate for city employees and contractors in Los Angeles on Nov. 8, 2021. (Mario Tama/Getty Images)
Businesses in COVID-19

The Job Creators Network (JCN), a business advocacy group, has filed a notice with the U.S. Court of Appeals for the 6th Circuit—which is hearing all legal challenges to President Joe Biden’s COVID-19 vaccine requirement—and sent a letter to the president saying the group expects the White House to comply with a court decision to freeze the mandate.

It comes days after the Labor Department’s Occupational Safety and Health Administration (OSHA) said it would suspend enforcement of the mandate after an appeals court reaffirmed its decision to temporarily block the rule, which was published earlier this month. Affecting tens of millions of private-sector employees, the mandate triggered a barrage of lawsuits from Republican states, businesses, individuals, and other groups.

On Nov. 18, White House press secretary Jen Psaki said businesses with 100 or more workers should move ahead and implement the federal governments’ rule requiring workers to get vaccinated or submit to regular testing, in spite of the temporary stay.

“Our message to businesses right now is to move forward with measures that will make their workplaces safer and protect their workforces from COVID-19,” she told reporters at the White House. “That was our message after the first stay issued by the 5th Circuit. That remains our message and nothing has changed.”

Despite OSHA’s decision and the legal challenges, Psaki said the Biden administration is confident that it has the authority to implement the rule and confirmed the White House is still working under the premise that businesses will implement the mandate by Jan. 4, 2022.

“We are still heading towards the same timeline,” she said. “The Department of Justice is vigorously defending the emergency temporary standard in court, and we are confident in OSHA’s authority.”

Last week, the dispute over the OSHA rule, known as an emergency temporary standard, was transferred to the 6th Circuit Court, which has a majority of its judges confirmed by Republican presidential administrations.

JCN also filed a notice (pdf) with the 6th Circuit Court, urging the Cincinnati-based court to promptly hear and resolve the legal challenges to the mandate. In the letter to the White House, the group argued that the Biden administration’s actions amount to “executive overreach,” a “vaccine mandate federal power grab,” and that it’s “ignoring the courts” in urging businesses to proceed with implementation despite the stay.

“Today, Job Creators Network officially notified the court of the White House’s inappropriate pressure and calls for a prompt final resolution of the mandate challenge,” Alfredo Ortiz, president and CEO of JCN, said in a statement. “Joe Biden and Jen Psaki must cease and desist from pushing small businesses into compliance with this illegal edict.”

Recent data from the Centers for Disease Control and Prevention show that about 47 million U.S. COVID-19 cases and around 768,000 deaths have been reported in the United States since the start of the pandemic. COVID-19 is the illness caused by the CCP (Chinese Communist Party) virus.