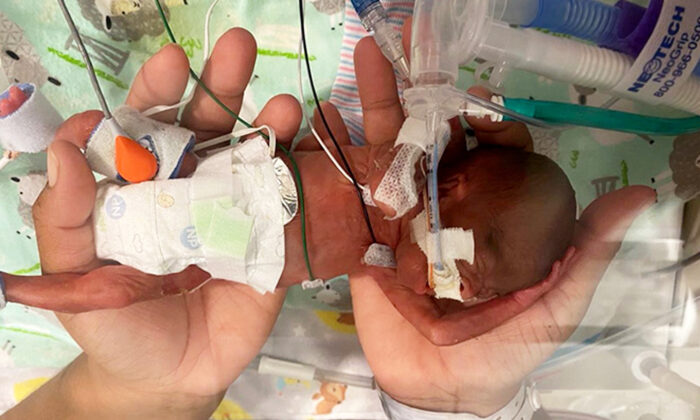 A baby boy in Alabama who was born 132 days premature has beaten less than 1 percent survival odds to surpass his first birthday and earn an incredible Guinness World Records title: World’s Most Premature Baby.

Curtis Zy-Keith Means came into the world in July 2020 at the University of Alabama at Birmingham (UAB) weighing just 420 grams (0.9 lb). After a nine-month battle for life in the NICU, Curtis headed home on April 6, 2021, to more than hugs, cheers, and tearful farewells.

Curtis’s mother, Michelle Butler—a 35-year-old Michigan native who’s lived in Alabama for 10 years, settling in Greene County, Eutaw, with her family—went into labor at 21 weeks and one day. It was the Fourth of July, and she wanted to be with her two older children, but contractions necessitated a trip to the emergency room.

“My water broke on July 5,” Michelle told The Epoch Times.

Premature twins Curtis and C’Asya were born that afternoon.

“I couldn’t hold them … but I looked at the babies. I looked at Curtis to make sure he was okay, and then C’Asya. She was the weakest child,” Michelle explained. “I was paying more attention to her at the time, because she wanted more comfort and prayer.”

“She was too weak to survive because she was really tiny,” said Michelle. “My little boy … [his] heart kept stopping. I kept on praying and the Lord came to me and told me, ‘If you give me C’Asya, I will let you keep Curtis,'” she recalled.

Michelle held her baby girl in her arms for the very first time as she passed. Through her grief, Michelle stayed strong for the baby boy who was still fighting, but his survival odds were heartbreaking.

“Numbers show that babies born so young have little to no chances of survival,” Dr. Brian Sims, a professor of pediatrics in the UAB Division of Neonatology and Michelle’s attending physician on call, told UAB News. “We typically advise for compassionate care in situations of such extremely preterm births. This allows the parents to hold their babies and cherish what little time they may have together.”

However, Curtis was a formidable fighter. After resuscitation, his heart rate and oxygen levels increased, and he was inducted into the hospital’s Golden Week Program™, a multidisciplinary effort for micro-preemie babies that includes clinical guidance on respiratory support, thermoregulation, nutrition and fluid management, infection prevention, and neurological status.

Curtis made it through his first week of life, one day at a time.

Michelle explained to The Epoch Times, “I was still praying … I still had to be strong.” She also credits her support system for helping her get through everything thereafter.

Michelle held her baby boy for the first time a month after he was born. She drove for 1 1/2 hours up to four times a week to see her baby, or deliver milk, juggling hospital visits with domestic life for the entire duration of Curtis’s 275-day NICU admission.

In order to get through this challenging phase, her philosophy was: “Don’t give up. You got this; you’re a very strong woman, keep on pushing.” Through the nine months in the hospital, Curtis received round-the-clock care. The nurses provided help by checking his vitals and soothing him to sleep.

His speech therapists helped him learn to use his mouth to eat, whilst the respiratory therapists assisted him with various breathing alternatives so that he could get off the breathing machine, according to UAB.

On April 6, 2021, when Curtis finally came home, Michelle felt that her family was complete. She believes baby C’Asya lives on through her twin brother.

As for the Guinness World Records title, it all began when Dr. Colm Travers, assistant professor in the Division of Neonatology, first suspected that Curtis was the smallest baby ever born in the world, a day after his birth. Travers continued researching records as Curtis went from strength to strength, but never found proof of a more premature infant. Thus he reached out to Guinness World Records with Michelle’s consent.

Dr. Sims told Guinness, “I’ve been doing this almost 20 years, but I’ve never seen a baby this young be as strong as he was. There was something special about Curtis.”

Curtis was recognized by Guinness World Records as the most premature baby ever to survive. The previous record-holder, Richard Hutchinson of Wisconsin, was born at 21 weeks and two days on June 5, 2020, just one month before his successor.

Shocked and proud, Michelle received her baby’s certificate in a ceremony held at Curtis’s place of birth, UAB Women and Infants Center, in October. Members of Curtis’s care team attended to reunite with the blossoming baby boy.

Curtis’s unique story, said Dr. Sims, will be “read and studied by many” in hopes of helping improve outcomes for premature babies around the world.

To anyone dealing with a hard time, Michelle implores, “Just keep the faith, keep breathing in!”