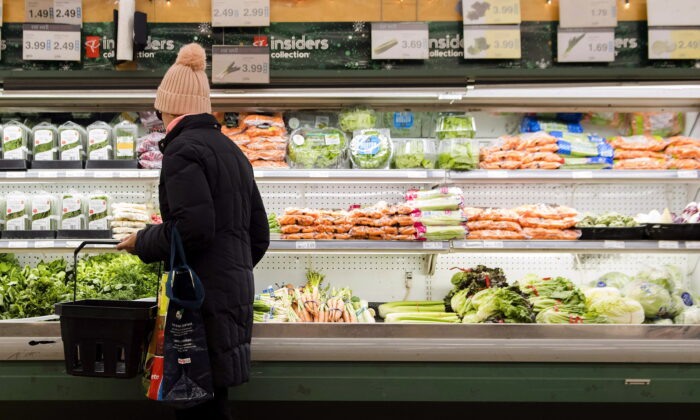 A woman looks over produce in a grocery store in Toronto on Nov. 30, 2018. (The Canadian Press/Nathan Denette)
Economy

The owner of a New York City supermarket chain predicted the food prices will increase sharply in the coming months, with some increasing 10 percent in the next two months.

John Catsimatidis, the billionaire supermarket owner of Gristedes and D’Agostino Foods, warned that food giants such as Nabisco, PepsiCo, and Coca-Cola will prioritize raising prices on products.

“I see over 10 percent [price increase] in the next 60 days,” he said in an interview with Fox Business on Monday, adding that the trend will not drop “anytime soon.” Catsimatidis cited rising inflation and supply chain bottlenecks that are currently plaguing supermarkets and other retailers around the United States.

Catsimatidis then cautioned: “I see food prices going up tremendously” because food company CEOs “want to be ahead of the curve and the way they’re doing it is they’re dropping all promotions. They are dropping low-moving items.”

“Why give away something when you don’t have to give it away and you make more margin?” Catsimatidis asked. “So I think that now these companies are going to have record profits in the third quarter.”

Experts have said that a significant backlog of shipping containers is currently being processed at two major California ports is snarling delivery of food and other goods. Energy shortages in the Asia-Pacific and Europe, as well as COVID-19-related concerns, lockdowns, and vaccine mandates have also been blamed for the supply crunch.

Earlier this month, the White House announced that it was able to push Walmart, FedEx, and UPS into committing to adding more shifts to alleviate shipping issues. The Port of Los Angeles also committed to 24/7 shifts, the Biden administration also said.

Compared with one year ago, consumers are paying significantly more for goods and services, according to recent data released by the Department of Labor. It came as the agency reported that the consumer price index, a key inflation gauge that measures how much Americans pay for goods and services, rose approximately 0.4 percent in September, up 5.4 percent year-over-year.