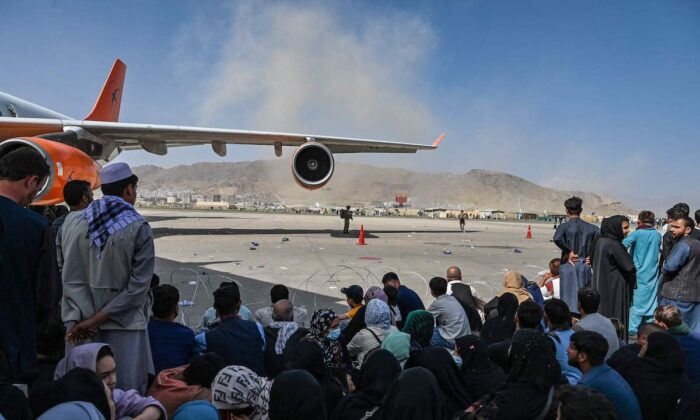 Biden Reveals How Many American Citizens Might Still Be in Afghanistan

President Joe Biden during a Wednesday ABC News interview revealed there may be about 15,000 Americans stuck in Afghanistan as U.S. forces hastily attempt to evacuate them at the Kabul airport.

Also trying to escape are tens of thousands of Afghans who either fought alongside or provided assistance to the United States but fear reprisal attacks from the Taliban, an extremist group that took over most of the country and its capital this week.

Biden told ABC News’ George Stephonopoulous that U.S. officials estimate there are between 10,000 to 15,000 Americans in Afghanistan and added that the “estimate we’re giving” is 50,000 to 65,000 Afghan allies, including family members.

A day later, on Thursday, Pentagon spokesman John Kirby said he doesn’t know how many Americans are still inside Afghanistan.

“Americans should understand that we’re gonna try to get it done before Aug. 31st,” Biden said in the interview, his first one since the Taliban took over the country. The president said the U.S. military will attempt to evacuate all Americans out of the South Asian country by that date.

Outside the Kabul airport on Thursday, there were scenes of chaos, according to video footage posted online. The video shows what appears to be Afghan security forces or possibly foreign security forces opening fire while people scream. Details about the incident are not clear, and The Epoch Times cannot verify its authenticity.

For how the withdrawal and evacuation are being handled, the Biden administration has received significant bipartisan criticism. Biden, in response, has blamed the Afghan government and army for refusing to fight the Taliban, although neither he nor the other U.S. officials have been able to provide clear answers about how Washington is handling the evacuation and security situation at the Kabul airport.

The president also received flack for remaining on vacation at the Camp David presidential retreat for several days. According to Federal Aviation Administration records, Biden is scheduled to head to his home state of Delaware for several days. On Wednesday, Biden spoke about COVID-19 booster shots but didn’t stay for questions from reporters about Afghanistan.

Before the withdrawal, the president said in July that the process would be secure and orderly, while U.S. intelligence assessments predicted that the government would not collapse in just days. During the ABC News interview, the president appeared to change his mind and said there would be no way the withdrawal could be handled without “chaos ensuing.”

At one point, Biden said that while he didn’t trust the Taliban, they were cooperating with the U.S. military.

“I’m not sure I would have predicted nor would you or anyone else, that when we decided to leave that they’d provide safe passage for Americans to get out,” the President.

The Taliban is considered a terrorist group by a number of federal agencies and governments around the world, accused of harboring terrorist networks like al-Qaeda and the Haqqani network.

Defense Secretary Lloyd Austin, in a news conference Wednesday, said that Taliban members are checking the documentation of people trying to enter the airport. However, State Department Deputy Secretary Wendy Sherman said the group is denying Afghan civilians from reaching the airport, accusing the terrorist group of reneging on its commitment to the United States.

“We don’t have the capability to go out and collect large numbers of people,” Austin also said.