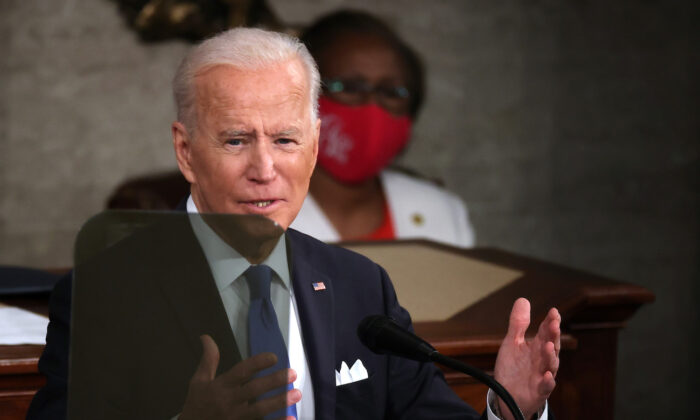 President Joe Biden addresses a joint session of congress in the House chamber of the Capitol in Washington, on April 28, 2021. (Chip Somodevilla/Getty Images)
Executive Branch

President Joe Biden, during his speech to a joint session of Congress on April 28, called for a ban on high-capacity gun magazines that can hold up to 100 bullets.

“We need a ban on assault weapons and high-capacity magazines again. Don’t tell me it can’t be done,” Biden said. “We’ve done it before … and it worked. Talk to most responsible gun owners, most hunters; they’ll tell you there’s no possible justification for having 100 rounds—100 bullets—in a weapon.”

It isn’t clear why Biden specifically made the proposal to ban the 100-round magazines, as Democratic lawmakers and gun-control groups have tried to push for a ban on magazines that hold more than 10 rounds. Some states have also attempted to pass legislation that bans magazines holding more than 17 rounds in recent days.

Connor Betts, a gunman who opened fire on a street in Dayton, Ohio, used a 100-round “drum” magazine in 2019. The shooter at the Gilroy Garlic Festival in California that year also had one but didn’t use it.

The president also called for a ban on so-called assault weapons, universal background checks for firearms purchases, and regulations on do-it-yourself guns made from parts kits.

“We need more Senate Republicans to join with the overwhelming majority of their Democratic colleagues, and close loopholes and require background checks to purchase a gun,” he added. In his speech, he referenced a recent mass shooting in Boulder, Colorado—which has universal background checks—that left 10 people dead at a supermarket.

Separately, several top Senate Democrats introduced a bill that would federally ban gun magazines that hold more than 10 rounds, echoing provisions currently being implemented in states such as California and New York.

The Department of Justice has previously stated that the 1994 federal ban on so-called high-capacity magazines—which was promoted by Biden when he was a Delaware senator—didn’t lead to a significant drop in shootings and murders. That study has been often cited by gun-rights groups including the National Rifle Association (NRA) and Gun Owners of America for why such legislation would be ineffective.

“We cannot clearly credit the ban with any of the nation’s recent drop in gun violence,” the DOJ stated in 2004. “Should it be renewed, the ban’s effects on gun violence are likely to be small at best and perhaps too small for reliable measurement.”

The NRA, meanwhile, reacted to Biden’s touting of the 1994 Federal Assault Weapons Ban in his speech.