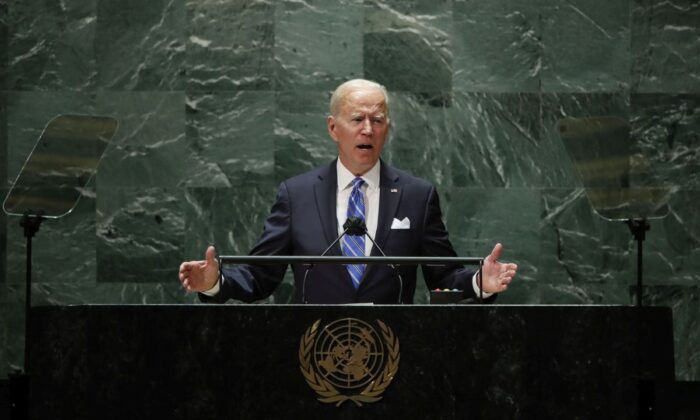 President Joe Biden delivered his first address at the U.N. General Assembly in New York on Sept. 21, declaring that the United States is “back at the table.”

“We’re back at the table in international forums, especially the United Nations, to focus attention and to spur global action on shared challenges,” he told the assembly, emphasizing alliances within the North Atlantic Treaty Organization, the European Union, the Association of Southeast Asian Nations, and others.

Much of his speech was dedicated to the COVID-19 pandemic.

“Bombs and bullets cannot defend against COVID-19 or its future variants,” Biden said, claiming that “science and political will” are necessary to end the pandemic. Some experts, including the head of the Oxford Vaccine Group, have said in recent days that the virus will likely become endemic and that treatment regimens, not vaccines, are the way to combat the virus.

The United States, Biden said, is “reengaged at the World Health Organization and working in close partnership with Covax to deliver life-saving vaccines around the world. We rejoined the Paris climate agreement, and we’re running to retake a seat in the Human Rights Council next year at the U.N.”

At one point, Biden appeared to make reference to his administration’s decision to pull U.S. military forces out of Afghanistan.

“Instead of continuing to fight the wars of the past, we are fixing our eyes on devoting our resources into the challenges that hold the keys to our collective future,” Biden said. “Ending this pandemic, … managing the shifts in global power dynamics, shaping the rules of the world on vital issues like trade, cyber and emerging technologies, and facing the threat of terrorism as it stands today.”

But Biden’s speech to the U.N. comes at a diplomatically precarious time for his administration.

His administration received significant criticism from several allies, including the UK, over the rushed and chaotic withdrawal and evacuation from Afghanistan in August. Questions were raised about whether the United States would be able to properly provide military support to its allies, and at one point the UK Parliament held Biden in contempt over the pullout.

Before that, French Minister of Europe and Foreign Affairs Jean-Yves Le Drian accused Biden of choosing to “exclude a European ally and partner such as France from a structuring partnership with Australia, at a time when we are facing unprecedented challenges in the Indo-Pacific region” before claiming Biden’s announcement was akin to former President Donald Trump’s foreign policy.