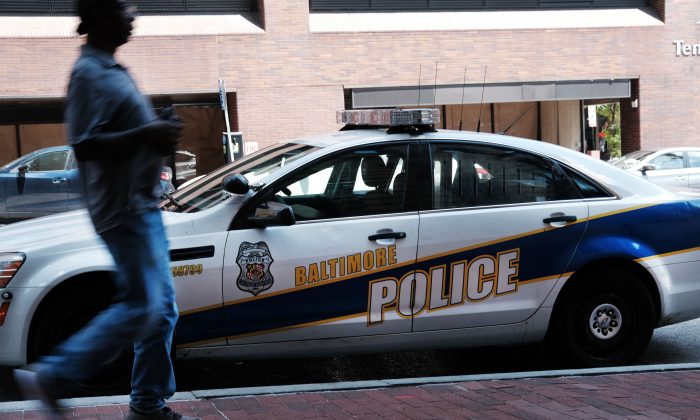 A person walks past a police car in Baltimore, Md., in a file photo. (Spencer Platt/Getty Images)
Regional News

Around three dozen businesses in Fells Point, Baltimore, said in a letter that they won’t pay taxes unless the city adequately deals with a surge in crime in the area that included a series of recent shootings earlier this month that left three dead.

According to local reports, in response to a recent spate of violence in the area, the Baltimore Police Department’s Mobile Command Center has set up in Fells Point for the weekend. Harrison, days after the letter was sent during a town hall, promised more officers would be deployed around the historic bar area and would be “laser-focused on scanning for weapons and potential incidents.” It’s unclear if the heightened police presence was due to the letter or due to the general spike in crime and homicides.

“What is happening in our front yard—the chaos and lawlessness that escalated this weekend into another night of tragic, unspeakable gun violence—has been going on for far too long,” the letter states.

The business owners who signed the letter want the city to enforce traffic and parking laws, pick up trash, stop the open-air drug sales, and allow police to enforce laws.

“The trash that piles up every week drifts into the Inner Harbor and hurts the environment, attracts rodents and fosters disease, and stinks up the streets and damages the beauty of our wonderful waterfront community,” they wrote.

If nothing is done, the businesses said that the “undersigned parties are prepared to withhold our city taxes and minor privilege and permit fees and place those funds into an escrow account, which we will not release until and unless basic and essential municipal services are restored.”

One of the business owners, Eric Mathias—who operates The Horse You Came In On saloon—sharply criticized Baltimore city officials in a Facebook post last week, saying the laws only seem to apply to business owners and taxpayers.

“We have people, illegally and openly selling booze [and] drugs and assaulting residents and visitors (for years now) in basically a public park,” he wrote, noting that city officials and police “sit back and not do a [expletive] thing, [be]cause they have no leverage and it’s the highest level of cowardice.”

He stated that the city’s “rules only apply to people they can squeeze and shake down for dollars.”

Mathias then announced that “for the first time,” his bar will have armed security and won’t stop until it “collapses” or until Fells Point returns to normalcy.

Bill Packo, who owns Barley’s Backyard, described the area as being rife with out-of-control violence and public intoxication.

“It’s a shame. What they’re letting happen to Fells Point is what they let happen in the Inner Harbor, and now it has made its way here,” Packo told WJZ-13. “There’s alcohol being sold by individuals out there, drugs, and clearly we all know about the shootings that took place last weekend. But there needs to be some control out there. There is none whatsoever.”

During a meeting last week, city leaders responded to questions about whether efforts are being taken to curb the violence and crime in Fells Point.

“Please know this is not a one and done, this is not a ‘you’ll see an increase presence this weekend and that’s going away next weekend.’ That’s not the case. We are absolutely working toward a more sustainable solution for everyone involved,” said Sunny Schnitzer, the deputy mayor of public safety for Baltimore.

The statement came after Marilyn Mosby announced the city would stop prosecuting drug possession, trespassing, prostitution, and similar charges, claiming it would halt the spread of COVID-19 and that prosecuting such crimes doesn’t provide any value to the community.

And despite an assertion from Marilyn Mosby that Baltimore crime is on the decline amid the pandemic, the city continued to see an extremely high rate of homicides in 2020, according to police data. The city, for the sixth year in a row, saw more than 300 murders—meaning the city sees around 60 murders per 100,000 people—making Baltimore one of the most violent cities in the United States, the data show.

Baltimore city officials didn’t respond to a request for comment on the letter by press time.