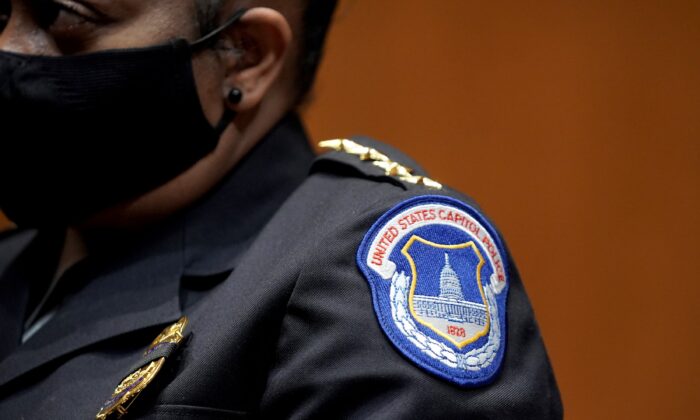 The husband of a woman who was shot dead by a U.S. Capitol Police officer in the Capitol on Jan. 6 says he still does not know the identity of the officer.

“Somebody up in D.C. knows, I think a lot of people know, but nobody is telling us. And the silence is deafening,” Aaron Babbitt said on Fox News’s “Tucker Carlson Tonight” on Monday.

“I never expected to lose my wife to political violence,” he added.

Aaron Babbitt filed a complaint last week against the Metropolitan Police Department, which conducted the investigation into the shooting. The police agency has refused to hand over records, illegally defying a Freedom of Information Act (FOIA) request, the court filing alleges.

The department declined to comment, citing the pending litigation.

Federal authorities announced in April that the officer who shot Ashli Babbitt would not be charged.

“Officials examined video footage posted on social media, statements from the officer involved and other officers and witnesses to the events, physical evidence from the scene of the shooting, and the results of an autopsy,” the Department of Justice said in a statement. “Based on that investigation, officials determined that there is insufficient evidence to support a criminal prosecution.”

An attorney representing the officer said that the decision “is the only correct conclusion” and that the officer “had to resort to deadly force.”

“He did so after clearly identifying himself and ordering the mob not to come through the barricade,” Mark Schamel, the lawyer, said in an emailed statement. “He used tremendous restraint in only firing one shot, and his actions stopped the mob from breaking through and turning a horrific day in American history into something so much worse.”

But Terrell Roberts, who is representing the Babbitt family, has noted that available evidence indicates Ashli Babbitt was not armed and that video footage shows a slew of officers in the Speaker’s Lobby, where Ashli Babbitt was seeking to enter when she was shot.

“I think one of the reasons they are hiding his identity is they don’t have a good explanation for this shooting,” Roberts said on Fox. “I think that if Ashli Babbitt had been brandishing a firearm and she was shot the officer would be identified by now and they’d be pinning a medal on him. So I don’t think they have a good explanation for the shooting and why they haven’t identified him.”

The U.S. Capitol Police has refused to release the identity of the officer and is not subject to FOIA. The agency said in February that reports suggesting the officer was David Bailey “are inaccurate,” promising to eventually share more information. Bailey was one of two agents injured during the 2019 congressional baseball shooting in Alexandria, Virginia.

Ashli Babbitt’s husband on Tuesday said he’s been sickened to hear what people have said about his wife.

“There has never been a person Ashli ran across in her daily life that didn’t love her and wouldn’t remember her in some way, shape, or form for the rest of her life,” he said. “But this is the game, this is the social media craziness that people just run with a theory and just take off with it. You know, it is up to us and the ones that love her and people like you for not giving up on it.”