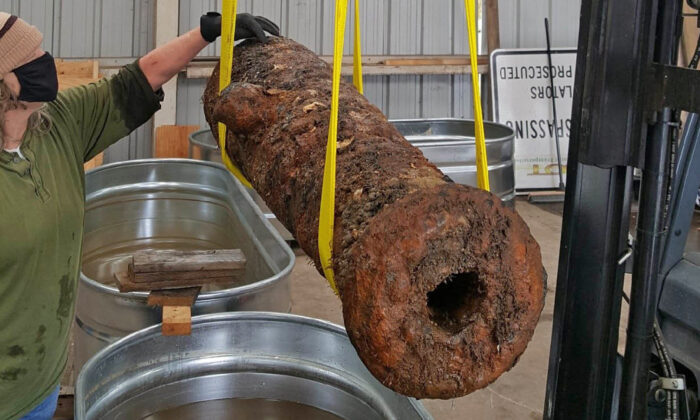 The U.S. Army Corps of Engineers has dredged up what is believed to be pre-Civil War artifacts from the Savannah River.

The items “inadvertently discovered” during regular dredging operations include three cannons, an anchor, and other materials, the Corps of Engineers said in a statement.

Archaeologists have not arrived at a definitive conclusion on the origin of the late February finds. But they are investigating dates as far back as “the 1770s when Great Britain exercised control of the Georgia colony.”

“This was an exciting find while we were doing regular maintenance dredging to ensure the Savannah River stays navigable for some of the large ships coming in,” U.S. Army Corps of Engineers Archaeologist Andrea Farmer told WTOC.

The experts found the artifacts during the ongoing Savannah Harbor Expansion Project (SHEP) to deepen the harbor from 42 feet to 47 feet of depth to provide more space for larger heavily-loaded vessels to navigate.

The Corps of Engineers has ended all dredging operations in the vicinity of the discovery to adhere to the National Historic Preservation Act, the statement said.

“It is exciting when artifacts from naval history are found,” Morley said in a statement. “The discovery of an anchor, cannons, and ship timbers gives us a great opportunity to work with our US colleagues and allies to help identify them.”

Morley said that they are investigating whether the items are from the HMS Rose.

“The possibility that they may, in fact, be from HMS Rose, a Royal Navy vessel that was part of our fleet operations during the American Revolutionary war is fascinating,” Morley said.

The experts took the February finds into their care. The Corps of Engineers said in the statement that they have experience in temporary preservation based on its removal of the CSS Georgia, a Confederate ironclad gunboat, from the Savannah River in the last few years.

“We hope that we find something down there that has integrity that can tell more of the story or the history of the Savannah River,” Farmer told WTOC.

“Of course, the 1700s there was a lot going on in Savannah at that time. So, it may just be a new part of the story that we’re able to uncover.”