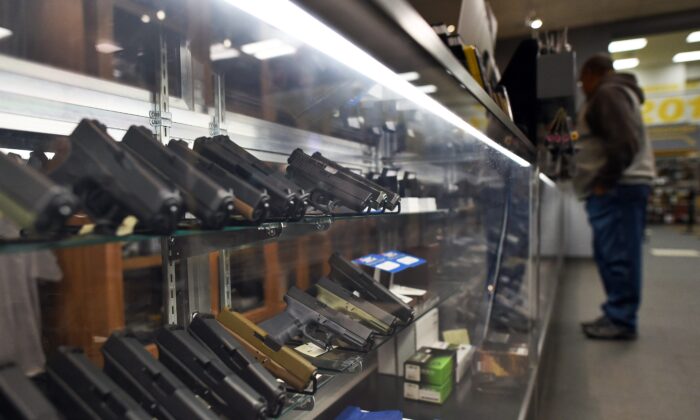 A man looks at handguns at a shooting range in Randolph, N.J., on Dec. 9, 2015. (Jewel Samad/AFP via Getty Images)
Federal-State Relations

The Arkansas state Senate voted this week to block federal law enforcement officials enforcing certain gun laws and regulations, sending a bill to the state House in the midst of congressional gun-control proposals.

The Senate voted 28-7 to approve the measure, which will then be sent to the House. Arkansas’ Legislature is overwhelmingly Republican.

“All acts, law, orders, rules, and regulations of the United States Government, whether past, present, or future, that infringe on the people’s right to keep and bear arms as guaranteed by the Second Amendment to the United States Constitution and Arkansas Constitution, Article 2, [Section] 5, are invalid in this state, shall not be recognized by this state, are specifically rejected by this state, and shall be considered null and void and of no effect in this state,” according to the text of the bill.

The measure will prohibit any law enforcement agencies in Arkansas from cooperating with federal officials to enforce federal gun laws that go in conflict with the rights provided in the Arkansas Constitution, according to Arkansas Online. Some state lawmakers expressed a worry that President Joe Biden would ramp up gun-control measures.

“It is more important now than ever that we protect our state rights,” Sen. Trent Garner, a Republican, said of the passage of the bill. “Once [Democrats in the U.S. Senate] get rid of the filibuster, guess what happens next? It is called packing the courts,” he claimed, referring to statements from Democratic lawmakers that the 60-vote legislative be removed in order to pass their agenda items.

“You would have to be totally blind to death to not see that our nation is as divided right now as it ever has been and we have elected officials in office in Washington, D.C., who actually don’t even care what the Constitution says and decided that they are going to do it their way no matter what happens and have no respect for the 10th Amendment,” Republican Sen. Jason Rapert said, according to the news outlet.

Following two mass shootings in Atlanta and Boulder, Colorado, Biden and top Democrats said that it’s imperative that new restrictions be passed. Dozens of Democratic House members this week sent a letter to Biden, saying that he should take executive action to ban “concealable assault-style firearms” such as the semi-automatic Ruger AR-556 pistol that was used in the Boulder shooting.

“Concealable assault-style firearms that fire rifle rounds pose an unreasonable threat to our communities and should be fully regulated under the National Firearms Act consistent with the intent and history of the law. The recent tragedy in Boulder, Colorado where 10 people including a police officer were killed is one in a string of deadly incidents involving this style of weapon,” Reps. Mike Thompson (D-Calif.), Joe Neguse (D-Colo.), Val Demings (D-Fla.), and Ed Perlmutter (D-Colo.) said in a letter to Biden.