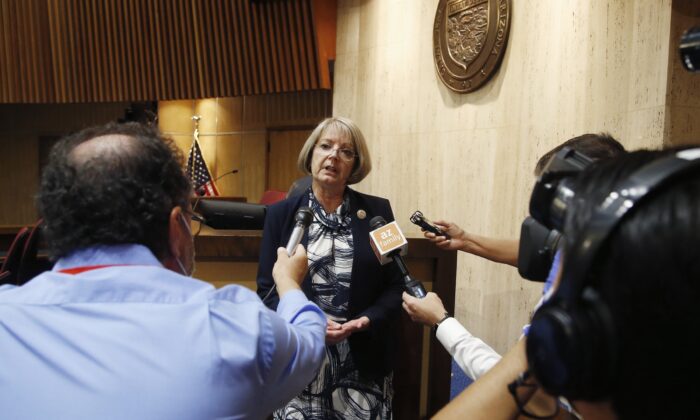 Officials in Arizona’s largest county have repeatedly described firms conducting a forensic election audit there as uncertified, even promoting the idea that they lacked certification from an agency that does not certify auditors.

In response to the audit teams seeking more items from Maricopa County to complete the state Senate-ordered audit, Maricopa County Board of Supervisors Chairman Jack Sellers dubbed the auditors “uncertified.” He and other county officials have used the word many times before, including in an announcement that they voted to replace the tabulation equipment that auditors have examined.

Most of the time, the body that officials believe could certify the auditors remains unnamed. But in a lawsuit filed last year challenging the authority of the Senate to order the audit through subpoenas, county lawyers warned against an audit being conducted by a technician not certified by the U.S. Elections Administration Commission (EAC).

A spokeswoman for the EAC, though, told The Epoch Times in an email that while the agency does certify voting systems and accredit voting system test laboratories, it “does not certify or accredit auditors or auditing systems.”

Arizona Senate President Karen Fann, a Republican whose caucus ordered the audit, questioned the county’s wording on the certification issue.

Fann said she checked in with the Federal Elections Commission to try to get a list of certified election auditors but was told there are no such certified auditors.

“This is where the Board of Supervisors are being coy with the public. The[y] know there are no certified auditors and they also know the two companies they hired are only authorized to certify the machines. So while they say they have performed two audits, that is a misstatement to say the least,” she wrote in an email.

After declaring the election results accurate and certifying the results on Nov. 20, 2020, and suing the state Senate to try to stop the audit, the county’s board in January approved an examination of the ballot tabulation by Pro V&V and SLI Compliance, two EAC-accredited laboratories. The firms checked the equipment configuration and setup. They concluded the machines were using certified software, did not contain malicious hardware, and were not connected to the internet.

Auditors and Arizona senators say the Senate-ordered audit is much broader and involves probing more aspects of the machines.

A county spokesman told The Epoch Times that the county never claimed Pro V&V and SLI were certified auditors but said that because they were accredited, they could work with the machines without risk of decertification.

“The contractors chosen by Senate leadership are neither auditors or voting system testing laboratories and would not have been considered for the audits conducted by the Maricopa County Elections Department,” he said in an email. The auditors “are unqualified and untrained for this type of work,” he added.

Asked for the source of those allegations, the spokesman pointed to the auditors’ testimony during Thursday’s hearing and in the documents they submitted to the Senate when they pursued the contract.

“Their stated qualifications are in general about cyber security and digital forensics—not auditing or elections,” he said.

Cyber Ninjas described itself in one of the documents in question as “a cyber security company with a focus on application security and ethical hacking.” It says it had “extensive experience” working with Dominion Voting Systems, whose machines are used to count ballots and perform other elections-related functions in Arizona. And its partners, it added, had experience in digital forensic acquisition and implementing ballot hand-counting procedures.

Fann told The Epoch Times that she cannot remember the first time Cyber Ninjas was first brought up but that the firm was recommended when she and other senators made calls to people in other states who were talking about audits along with other research.

“The firms we spoke with confirmed they did not do full audits but some were experienced to do specific parts of an audit. For every contact I made, I asked them if they could recommend other companies or individuals who where experienced in this field. It was part of this process that Doug Logan’s name came up along with many other referrals,” she said, adding that she was told Logan, Cyber Ninjas CEO, was working on election-related matters in Antrim County, Michigan, and Fulton County, Georgia.

“Mr. Logan confirmed everything we had heard from others and said he would be glad to put together a proposal for a forensic audit by building a team of experts and experienced firms to performed the various phases,” Fann said.

Logan especially has faced criticism from audit opponents for sharing a post on Twitter that said fraud happened in the election and that Republicans “rightfully believe they had their votes stolen.” In a post he authored, Logan used the hashtags “stopthesteal” and “fightback” as he claimed there were parallels between allegedly fraudulent elections in Venezuela and the 2020 election in the United States.

In a press conference in April just before the audit started, Ken Bennett, a former Republican Arizona secretary of state, told reporters that “if we get questions about tweets from three months ago, or his opinions or whatever, I’ll probably intervene and say that we’ll be talking about procedures and the counting of ballots.”

“As I’ve said many times to many of you and others in the press, we’re not here to audit Mr. Logan’s opinions about anything or anybody else’s opinions, we’re here to audit the ballots, envelopes, everything that was involved in the Maricopa election in November of 2020,” added Bennett, the Arizona Senate’s audit liaison.

Logan told reporters that the audit was focused on transparency and accountability, pointing to how cameras were livestreaming from the coliseum seven days a week, 24 hours a day. John Brakey, a Democrat who runs the election transparency group AUDIT USA, and who is serving as an assistant to Bennett, called the audit process “impressive.”

Critics have also noted that the total cost of the audit is not public, though that may change after a judge this week rejected the Arizona Senate’s attempts to keep some documents shielded.

The county has repeatedly resisted cooperating with the audit, including its continued refusal to turn over routers or router images. It also declined to let auditors use county facilities to conduct the audit, a decision made because of logistical concerns due to municipal elections being held in March and May and concerns about the firms the state Senate picked, the county spokesman said.

Instead, the county sent its 385 tabulators, nearly 2.1 million ballots, and other items to the Veterans Memorial Coliseum so auditors could examine them there.

Arizona Secretary of State Katie Hobbs, a Democrat, later used the fact that the equipment left the county’s possession as rationale for threatening to decertify the machines if the county tried using them in future elections. County officials agreed with her concerns and voted this week to replace the machines, which are leased from Dominion.

During the hearing this week, Fann and auditors questioned why Hobbs believed a forensic examination by an accredited laboratory “cannot be guaranteed to locate all potential problems” from the auditors’ examination.

“I certainly understand your confusion and I share that with you,” Ben Cotton, the CEO of CyFIR, a subcontractor handling the digital part of the forensic examination, responded.

“That position that they must replace all of the voting equipment is at odds with the public statements that were made by the Maricopa County officials following the two independent audits that they conducted early in this year.”