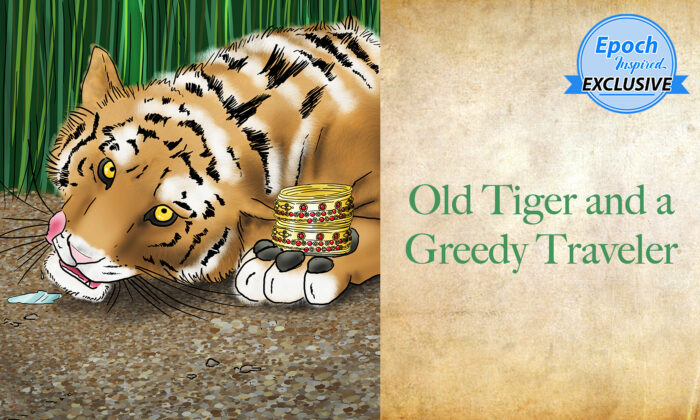 Ancient Tales of Wisdom: Old Tiger and a Greedy Traveler

“Old Tiger and a Greedy Traveler” is a tale about greed and how it can lead one down a dangerous and regretful path.

Once upon a time, there lived a tiger in a forest. As the years passed, he became too old to hunt. One day, the tiger was walking along the side of a lake when suddenly he spotted a gold bangle. Quickly, he picked up the bangle and thought that he could use it as an allure to catch someone. As he was having this thought, a traveler passed on the opposite side of the lake.

The tiger instantly thought to himself, “What a delicious meal he would make!” So he planned a scheme to attract the traveler. He held the bangle in his paw, making it visible to the traveler, and said, “Would you like to take this gold bangle? I don’t need it.”

As soon as the traveler saw the bangle, he wanted it, but he hesitated to go near the tiger. He knew that it was risky, yet he wanted the gold bangle. So he was cautious and asked the tiger, “How can I believe you? I know you are a beast and you might kill me.”

The clever tiger innocently said: “Listen traveler, when I was a young tiger, I was wicked, but now I have changed. I took the advice of a saint; I have left all evil behind and now I am all alone in this world and do only good and kind deeds. I have also grown old, I have no teeth, and my claws are blunt, so there is no need to fear me.”

The traveler was taken in by this smart talk, and his love for gold soon overcame his fear of the tiger. He jumped into the lake to wade across to the tiger.

But just as the tiger had planned, the traveler got trapped in the marsh. On seeing this, the tiger consoled him and said, “Oh! You need not worry. I’ll help you.”

Gradually, the tiger came toward the traveler and seized him. As the traveler was being dragged out onto the bank, he thought to himself, “Oh! This beast’s talk of saintliness tricked me completely. A beast is always a beast. If only I had not let my greed overcome my reason, I would not be in this trouble.”

However, it was too late; the tiger ate the traveler up. This is how the traveler became a victim of greed and the tiger was successful in his evil plan.