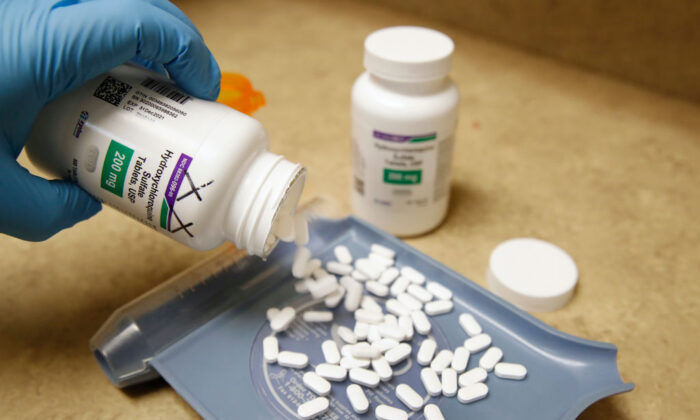 A pharmacy tech pours out pills of hydroxychloroquine at Rock Canyon Pharmacy in Provo, Utah, on May 20, 2020. (George Frey/AFP via Getty Images)
Health News

The United States outspent every other country in the world combined when it came to the top-selling 20 pharmaceutical drugs, according to a recent analysis of company financial filings by Public Citizen.

Americans spent a total of $101.1 billion, while the rest of the world spent $56.8 billion, on the top 20 drugs. The key findings of the analysis report (pdf) indicate that U.S. consumers overpay for drugs, and do not necessarily intake more than people from other countries.

The best-selling 20 drugs brought $157.8 billion in total global revenue for pharma companies with the U.S. accounting for 64 percent of the revenue pie. The sizable disparity makes the U.S. market essentially a cash cow for Big Pharma, which is fighting efforts to decrease the spending.

“Deceptive TV ads paid for by Big Pharma try to frighten and mislead Americans about new legislative efforts that would empower Medicare to negotiate drug prices,” said the report.

Medicare is currently prohibited from setting prices on drugs. If Medicare is given the authority to negotiate with drug manufacturers, Americans could see a significant lowering in medicinal costs. The “billions in cost-savings that could be used to improve and expand Medicare, including by increasing access to treatments as well as to dental, hearing and visual care.”

According to the report’s key findings, “11 of the 13 pharmaceutical companies selling these top drugs made more money in the United States from these drugs than they did in the rest of the world combined.”

Back in 2019, the House of Representatives passed H.R. 3, a bill that allows the Secretary of Health and Human Services (HHS) to negotiate prices with pharma companies in the Medicare program. This applies to 250 prescription drugs each year, including the 125 expensive ones offered under Medicare Part D or sold commercially.

Under H.R. 3, prices would be compared and based on those in the UK, Canada, Australia, Germany, France, and Japan. Prices would be made available to insurers and organizers that sponsor Medicare Part D, and they will be able to enter into further negotiation for more discounts. If the manufacturer refuses to enter negotiation, an excise tax of up to 95 percent of the drug’s sales can be applied on the company.

“Negotiation that uses an upper limit based on international prices, such as the one proposed in H.R. 3, is expected to reduce costs for patients in Medicare Part D and the commercial market through lower beneficiary premiums and cost-sharing,” according to a report in The Commonwealth Fund.

Some of the drugs with the biggest sales disparities include Gilead Sciences’ HIV medication, Biktarvy, and Humira, an autoimmune disease drug from AbbVie, which had U.S. sales revenues that were respectively five times and four times more than the rest of the world.