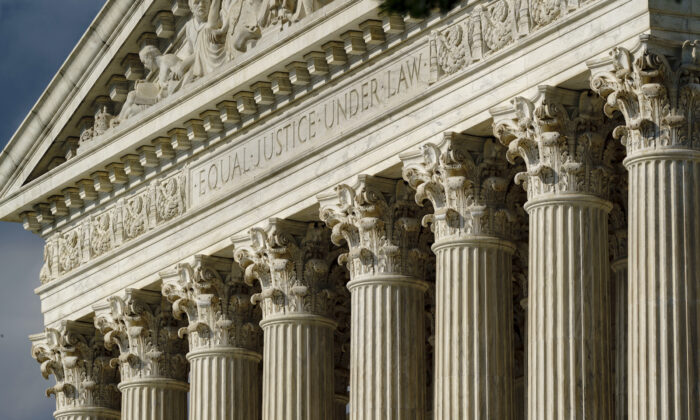 The Supreme Court ruled 6-3 that previously deported illegal aliens again facing deportation who claim a fear of persecution if they are removed to their country of origin may be indefinitely detained by the government.

Over the dissent of its three Democrat-appointed justices, the high court found that those noncitizens aren’t entitled to a hearing about whether they should be released while the government processes their claims.

Justice Samuel Alito wrote the court’s opinion in Johnson v. Guzman Sanchez, which was made public on June 29. Oral arguments took place telephonically on Jan. 11. Before that, both the trial court and the U.S. Court of Appeals for the 4th Circuit ruled against the government.

Not allowing people who have already been deported to seek release on bond makes sense, Alito wrote in the court’s opinion.

“Aliens who reentered the country illegally after removal have demonstrated a willingness to violate the terms of a removal order, and they therefore may be less likely to comply with the reinstated order,” he wrote.

The Immigration and Nationality Act (INA) provides that an alien unlawfully present in the United States may be deported after the Department of Justice issues a final order of removal,  but Congress restricts to where the person may be deported. An alien may not be removed to a country where his or her “life or freedom would be threatened in that country because of the alien’s race, religion, nationality, membership in a particular social group, or political opinion.”

Individuals who have been deported previously and then reentered the country, or who have failed to seek asylum within one year of arriving in the United States, may not apply for asylum. Those individuals are generally allowed to apply for “withholding of removal.”

This means that at the end of the adjudication process an immigration judge signs a deportation order and then advises the government that it may not carry it out. The “removal” of the person is said to be “withheld.” This status is “less certain than asylum, leaving its recipients in a sort of limbo,” according to the American Immigration Council. The government may still deport the person to another country if it agrees to accept the individual.

According to Alito, the INA contains various provisions authorizing the government to detain aliens during the removal process, and this case “concerns two of them: 8 U.S.C. Section 1226 and 8 U.S.C. Section 1231,” Alito wrote for the court.

“We are asked to decide which of those provisions applies to aliens who were removed from the United States but later reentered without authorization, were subject to reinstated orders of removal, and then sought withholding of removal based on fear of persecution in the particular countries designated by their removal orders,” he wrote.

“We conclude that [Section] 1231, not [Section] 1226, governs the detention of aliens subject to reinstated orders of removal, meaning those aliens are not entitled to a bond hearing while they pursue withholding of removal.”

In a dissent that was joined by Justices Sonia Sotomayor and Elena Kagan, Breyer took issue with the court’s majority.

“I can understand why Congress might not want to grant a bond hearing to an alien whose circumstances fall within the removal period. But why … deny a bond hearing to individuals who reasonably fear persecution or torture, and who, as a result, face proceedings that may last for many months or years (while their withholding-only proceedings wend their way toward completion)?”

Christopher Hajec, Director of Litigation for the Immigration Reform Law Institute (IRLI), praised the ruling in a statement provided to The Epoch Times.

“Once again, the Supreme Court has read immigration law as written, and refused to make the status of an alien subject to a final order of removal murky where the law does not make it so. The Court explained that the withholding of removal process is about whether an alien can be removed to a specific country where he may fear persecution, and does not change the final order of removal saying that he is to be removed from the United States,” he said.

IRLI had filed a friend-of-the-court brief in the case.

Lawyer Paul Hughes, who represented six individuals who claimed they were entitled to bond hearings while detained, told Reuters that the decision was “a devastating result for thousands of individuals each year who seek relief from torture or persecution abroad.”