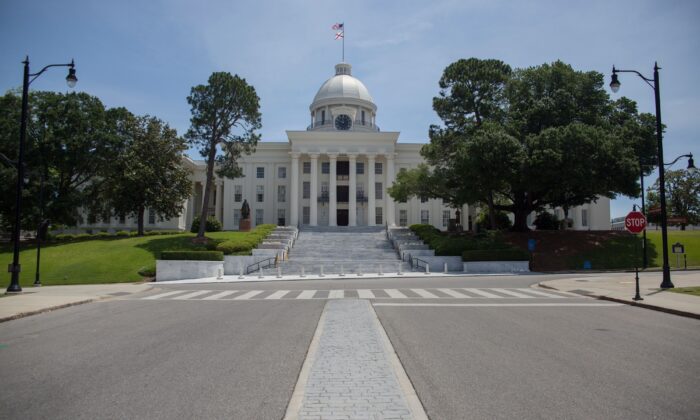 The Alabama State Capitol building in Montgomery, Ala., on May 19, 2019. (Seth Herald/AFP via Getty Images)
Education & Family News

The Alabama Board of Education has decided to ban public schools in the state from teaching the Marxist-invented critical race theory, which critics say holds that white people and the nation itself are inherently racist.

The move comes as public resistance to critical race theory (CRT) grows and intensifies among parents in communities across the nation who are fighting back by protesting and taking over local school boards. In 26 state legislatures, bills have been introduced or other steps have been taken to prevent CRT from being taught, Education Week reported.

CRT supporters denounce U.S. culture and history as “Eurocentrism” and “whiteness.” According to the report of the 1776 Commission, created by former President Donald Trump, CRT is “a variation of critical theory applied to the American context that stresses racial divisions and sees society in terms of minority racial groups oppressed by the white majority.”

The nine-member Alabama Board of Education, an elected executive agency, determines education policy for the state’s K–12 schools. Alabama Gov. Kay Ivey, a Republican, also serves as president of the board. The other members are elected to four-year terms by voters in eight education districts across the state.

On Aug. 12, the board approved a resolution by a 7–2 vote that forbids the teaching of material that would “indoctrinate students in social or political ideologies that promote one race or sex above another.”

The resolution was approved along party lines. All seven Republicans voted for it, while the board’s two Democrats voted against it.

The resolution is titled “The preservation of intellectual freedom and non-discrimination in Alabama’s public schools.”

“The Alabama State Board of Education believes that all individuals are endowed with equal inalienable rights, without respect to race or sex,” the resolution reads.

“Concepts that impute fault, blame, a tendency to oppress others, or the need to feel guilt or anguish to persons solely because of their race or sex violate the premises of individual rights, equal opportunity, and individual merit.”

Such concepts have “no place” in Alabama’s “public educational system,” the measure states. It adds that the board “will not support any K–12 public education resources or standards intended to indoctrinate students in social or political ideologies that promote one race or sex above another.”

Alongside the resolution, the board approved an administrative rule that would permit action to be taken against teachers who contravene the policy. Punishments are left to the discretion of local school boards, AL.com reported.

“Teachers are certainly safe as long as they’re teaching the course of study and doing what they’re asked to do by their boards,” State Superintendent Eric Mackey said following the vote.

“It is my role as a state board member to accept issues and solve them incrementally and immediately. I know we have a number of issues to deal with—masking, failures—and I’ve addressed every one responsibly as a board member,” he told AL.com.

“I’ve seen the effects of bias, and I know that we need to teach equity. We need to take a stand. The state board is responsible for putting a stake in the ground and saying this is what we believe. I believe it very strongly.”

Alabama NAACP chapter president Benard Simelton spoke at the public hearing. He said the resolution “has no merit” because no one is actually teaching CRT in Alabama’s K–12 schools.

“I think the governor and board members who are supporting this resolution are speaking on behalf of other groups out-of-state,” Simelton told AL.com following the meeting.

“We have to fight for the real issue that our children are facing, and that is disparity and discrimination. Those are real issues the school board should address, and they are not addressing those issues.

“The COVID virus is one of the most important factors our children are facing, and we need to do everything we can to protect those children.”

Board member Tonya Chestnut, who voted against the resolution, told AL.com that it addresses a crisis that doesn’t exist. According to her, the real crisis is the COVID-19 pandemic that poses a threat to the health of children and teachers.