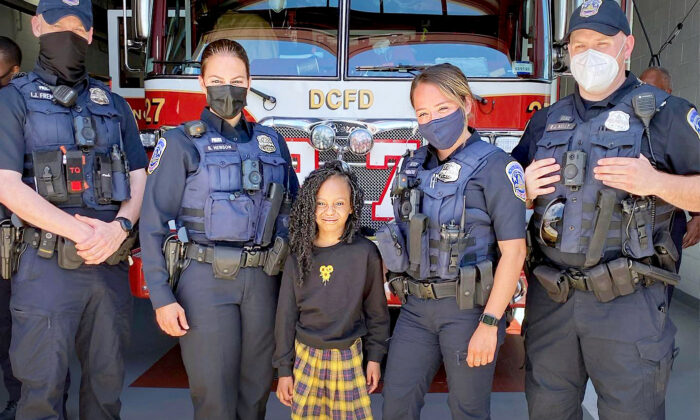 A 7-year-old girl who was shot while playing outside in Washington D.C. has been reunited with the first responders who helped save her life. Her family calls her survival a “miracle” and say they are grateful.

“Thank you for praying for me,” said Reagan Grimes in an interview with Fox after hearing how many people in the community had prayed for her recovery.

On May 5, Reagan had the opportunity to meet the first responders who’d helped save her life that fateful night.

The D.C. Fire and EMS departments posted photos of the reunion on Twitter, stating that they were “happy” to see her recovered.

“Reagan Grimes, the 7 year old shot 4 days ago, was reunited with the crew that helped save her life at Engine 27 in Deanwood,” the department wrote. “#DCsBravest and @DCPoliceDept officers are happy to see she’s doing well, and were able to give her some gifts.”

In the pictures they posted, the 7-year-old girl is smiling with a huge basket of gifts presented to her by the officers and EMTs.

But just a few days prior, Reagan and her family weren’t smiling.

“You almost ended my sister’s life,” Reagan’s brother, Amir Grimes, said on camera to the news outlet, hoping the shooters would hear his message. “She makes so many people happy. She’s the star of [our] life.”

Reagan was playing outside on May 1, around 7 p.m., when a dozen gunshots rang out on J Street northeast. The little girl was tragically struck in the back.

The family thought they were going to lose her.

First responders called her injuries “life-threatening,” and her family began preparing for the worst.

Fortunately, the young girl was able to return home and was reunited with her family just 3 days later.

“I’m just so thankful that she could be saved,” Reagan’s mom, Dashawn Grimes, told the department. “A lot of people don’t make it.”

Police are reportedly still searching for the shooter. Though they have little information on the culprits, investigators released a photograph of a white sedan they believe could have been involved.