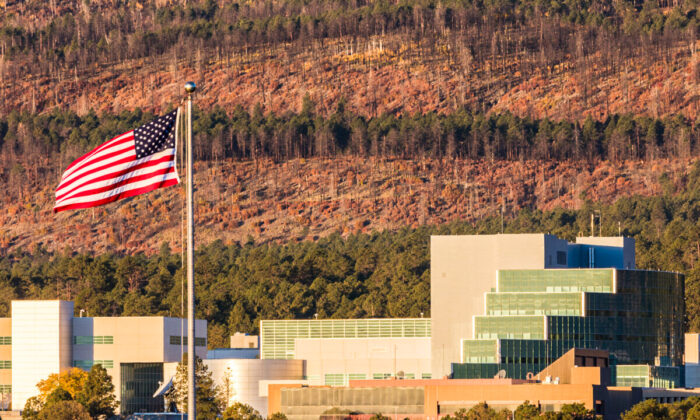 Buildings in the main technical area TA-3 at Los Alamos National Laboratory in Los Alamos, N.M., in 2016. (John Benner/CC by 2.0 via Flickr)
US News

The New Mexico lab that produced the world’s first nuclear bomb has lost 185 employees because of a COVID-19 vaccine mandate that took effect on Oct. 22, according to a lawsuit (pdf) filed against the operator of the facility the same day.

An additional 153 employees at the Los Alamos National Laboratory (LANL) were placed on leave without pay or are using vacation pay because they obtained a religious exemption, the lawsuit says. Twenty-six employees were granted medical exemptions.

The lawsuit cited an article by Los Alamos Reporter, which says that the numbers were disclosed during an all-hands meeting at the lab on Oct. 21.

The lab employs nearly 14,000 workers. Two-thirds of all the work at the facility is focused on weapons programs. Nearly one in five of the employees at the lab hold Ph.D. degrees. Triad National Security LLC operates the complex as a contractor for the federal government.

Approximately 85 percent of the LANL workforce had been vaccinated against the CCP (Chinese Communist Party) virus as of Aug. 23, when management announced a vaccine mandate, according to an internal email (pdf). The Food and Drug Administration granted full approval for the PfizerBioNTech vaccine on the same day.

A month later, on Sept. 20, LANL President Thomas Mason said an additional 1,000 employees had been vaccinated.

LANL officials didn’t immediately respond to a request for comment.

The lawsuit filed on Oct. 22 listed eight of the 153 employees who were placed on leave due to having received a religious exemption from the vaccine mandate.

“Defendants have approved religious exemptions for some employees, including plaintiffs and others not before the Court, but have given with one hand and then taken back with the other by imposing a blanket, one-size-fits-all accommodation that places those employees for whom a religious exemption has been granted on indefinite leave without pay and stripping them of their benefits,” the lawsuit states. “Defendants’ actions amount to a constructive termination.”

LANL didn’t grant exemptions to employees who have acquired natural immunity to COVID-19 through prior infection. A number of studies show that natural immunity grants similar or better protection against the virus. While the effectiveness of vaccines wanes over time, requiring booster shots, natural immunity lasts at least a year, according to a recent peer-reviewed study.

Employees with religious exemptions were told on Sept. 9 that they would be placed on unpaid leave or “may use vacation leave until an accommodation that will not unduly burden the laboratory or other employees has been identified,” according to a directive cited in the lawsuit.

On Sept. 20, LANL extended the vaccine mandate to employees working from home.

The lab operated throughout the pandemic with employees wearing masks and social distancing.

A judge in a separate lawsuit on Oct. 15 rejected a request by 114 employees of the lab to block the vaccine mandate.