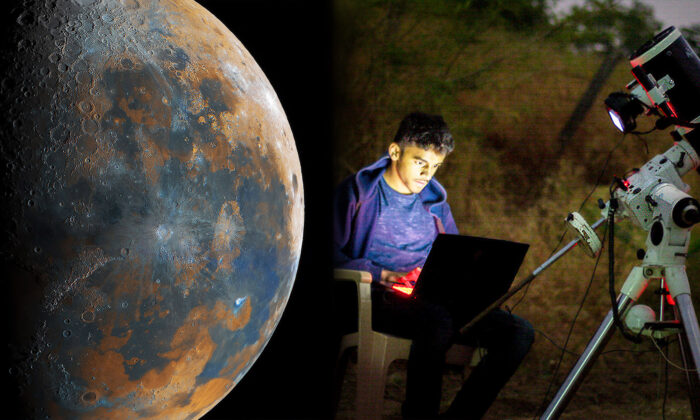 An incredibly detailed image of the Moon was composed by an Indian teen, who captured 55,000 images—racking up over 186 gigabytes on his laptop in the process—for a pastiche of celestial proportions.

Sixteen-year-old Prathamesh Jaju from Pune, Maharashtra, shared his HDR (high-dynamic range) image of a waning crescent moon on Instagram. He admitted that amassing so many photos for his most detailed and clearest picture to date put his technology to the test. “[It] almost killed my laptop with the processing,” he said.

The amateur astrophotographer began the project by capturing multiple videos of different small sections of the Moon in the early hours on May 3. Each video contains around 2,000 frames; the trick was to merge and stack the videos to create one image, while layering them to generate a three-dimensional effect.

“So I took around 38 videos,” Jaju explained, News 18 reported. “Now we have 38 images. We sharpen each one of them manually and then stitch them together in Photoshop, like a big mosaic.”

Jaju told ANI on Twitter that he learned how to capture and process such composite images from articles on the web and YouTube videos. After some finishing touches, the almost 40-hour processing yielded a stunning composition of the Moon in glorious detail, with rich texture and a surprising range of colors.

The colors, said Jaju, are a fascinating phenomenon. They represent the minerals on the Moon that DSLR cameras can resolve with greater clarity than the human eye can.

“The blue tones reveal areas rich in ilmenite, which contains iron, titanium, and oxygen,” he said. “While the orange and purple colors show regions relatively poor in titanium and iron.” White and gray tones indicate areas exposed to more sunlight.

For his more tech-savvy followers on Instagram, the teen shared the specifications for his telescope, super-speed USB camera, tripod, and lenses, as well as the software he used to capture the images.

Meanwhile, thousands of viewers were struck by the final composite picture Jaju pulled off.

“Bravo! This is beautiful work, aesthetically, astronomically, and technologically,” commented one Instagram user.

“Hats off to you for capturing something so graceful!” wrote another. “This image cannot be duly quantified in any way and should go down in history as the best image of the Moon captured from Earth.”

In the future, Jaju hopes to become a professional astrophysicist.